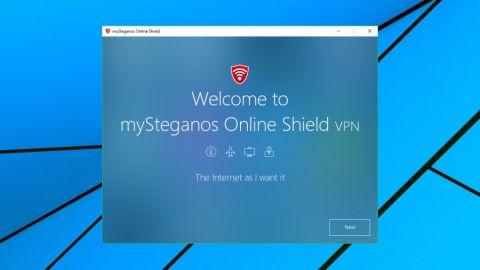 An easy-to-use service which delivers basic protection at a click, but doesn't have the power, speed or configurability that most users will expect.

Steganos Software is a Berlin-based developer which has been producing quality software since 1996. Current products include a password manager and encryption package, and Steganos Online Shield, a beginner-friendly VPN.

The service has apps for Windows, Android, iOS, and (a recent addition) Mac. While that's good, there's no support for using the system on any other platform, or by anything other than the official apps,

The network is small with a choice of only 19 countries.

MySteganos Online Shield is aimed more at the ordinary user than VPN experts. Apart from a brief mention of AES-256 encryption, OpenVPN and IKEv2 support, the website ignores talk of VPN-specific features to talk about its privacy-related add-ons: ad-blocking, protection from social media tracking, automatic cookie deletion when a session closes.

Steganos' pricing seems puzzling at first glance, because the company has somehow forgotten to mention the length of each subscription term, leaving you looking at prices per month and totals only. But once you realize that, and spend a moment wondering if anyone at Steganos has ever looked at their own website, it's easy enough to work backwards and figure it out.

Whatever you think of Steganos' relatively basic specs, the company does at least show some confidence in its service by offering a risk-free 7-day trial, and a 30-day money-back guarantee offers further protection if you sign up.

MySteganos Online Shield's privacy policy is better than you'll typically see with a company who isn't a specialist VPN provider, and it's reasonably easy to find the information you need.

The service doesn't require personal details such as an email address. Instead it generates a ‘pseudonymous User ID’ based on the public key of your computer MAC address

If you do provide an email address, the company has an opt-in system for sending mails, but you can unsubscribe at any time and the address is never sold or traded with anyone else.

There are some familiar clauses about the company website, and how it uses Google Analytics and cookies – not ideal, but similar to other providers, and not something which impacts on the core service.

MySteganos Online Shield is refreshingly easy to try out. There's no complicated purchase process to complete, no demands for your email or any other personal details, you just hit 'Download Free Trial' and follow the links to grab the Windows, Mac, Android or iOS apps.

Sometimes a provider will move its registration process to the app, but that's not the case here. We downloaded and launched the Windows client, and after a couple of simple tutorial screens, and clicking a link asking for a free trial, our service was activated immediately. There was nothing else to do, not even a user name and password to create, and we were able to begin exploring the service within around 60 seconds of downloading it.

The app interface has a simple location list, a connect/ disconnect switch, and four buttons to enable or disable its various privacy settings: blocking ads, preventing tracking, automatically erasing cookies or anonymizing your browser type (that is, changing its user agent.)

Although this is easy enough to understand, it's probably not the best use of screen real estate. We suspect most users won't want to turn the ad-blocking switch on and off for individual connections, for instance. It would make more sense to tuck these options away on a Settings screen, where you would only see them if necessary.

Meanwhile one very important VPN-specific part of the client, location selection, gets almost no attention at all. The current location is displayed with a tiny flag icon, smaller than a single letter of app's font, and the list is a simple menu with no sorting or filtering options, no server load or ping time figures, no Favorites system or anything else.

This does at least keep basic operations very, very simple. Once the privacy settings are set up as you'd like, there's nothing more to do than choose a location, tap Protect Connection to get connect, and tap it again when you need to select. The client interface and desktop notifications let you know when the VPN connects and disconnects.

If you need more control, tough: there are barely any advanced options at all. No choice of protocol, no choice of DNS, no kill switch or custom leak protection settings.  Just a couple of checkboxes to launch and automatically connect when Online Shield starts, and the ability to add email exceptions, guaranteeing that you'll be able to send emails while you're connected.

The bonus add-ons – ad and tracker blocking, automatic cookie erasing, anonymizing browser type – did little to win us over. The ad blocker does remove some banners, for instance, but not as many as free specialist tools such as Adblock Plus.

We checked out Steganos' Android app, and found it was even more basic than the Windows version. There were none of the privacy features of the Windows client, just a shield which you dragged up and down to connect and disconnect. The location picker was the same simple list, and there were no worthwhile settings at all.

There was some good news: it worked, and also gave us a free 7-day trial with no registration required, and that alone could make Steganos Online Shield Android handy as a short-term emergency backup VPN. But it's very, very, very hard to see why you'd spend money on it, rather than any of its main competitors.

Steganos doesn't provide OpenVPN configuration files, which prevented us setting up our usual performance testing tools. As a result, we had to fall back on our older method of manually logging on to selected servers, then checking the reported download speeds from sites such as SpeedTest.net and Netflix' Fast.com.

Our initial tests found Steganos' local UK servers delivered a capable 50-55Mbps on a 75Mbps test line. That's not quite up to the standards of the top VPNs, but still more than fast enough for most purposes.

The results became more inconsistent as we moved further away. Most of Europe hovered around a disappointing 10-20Mbps. US connections recovered well, averaging 40-45Mbps. But then long-distance connections tailed off, with Australia and Singapore barely passing 10Mbps. That's good enough for browsing and basic streaming, but it doesn't compete with the top VPN competition.

The Windows client does nothing to manage or preserve the tunnel, either. We manually closed the VPN connection, and although the client recognized this and displayed a brief desktop notification, it didn't attempt to reconnect. If the Steganos window was minimized and you didn't spot the notification, you would carry on banking, shopping and more, assuming you were protected by the VPN, when in reality you were using your (possibly insecure) regular connection.

Unblocking streaming sites can be a challenge for even big-name specialist VPNs, so we didn't have much hope for Steganos Online Shield.

The service got off to a good start, though, when we logged on to its UK server and were able to access BBC iPlayer. That's already a better performance than you'll see with some VPNs.

Logging on to Steganos' US server allowed us to stream US-only YouTube content without difficulty. That's an easier task - just about every other VPN in existence does the same - but it's still good to know.

The real challenge is Netflix, of course, as it has some of the best VPN detection and blocking technologies around. And there, perhaps unsurprisingly, Steganos failed, with Netflix recognizing what we were doing and displaying its usual 'you seem to be using an unblocker or proxy' message.

Online Shield can't match the best of the unblocking competition, then, but it's not entirely useless, either. If you can live without Netflix but need to access other restricted sites, it's worth using the free trial to see how the service works for you.

MySteganos Online Shield is so basic that experienced users probably won't need much help, and that does have its advantages. Especially as the feeble support site has very little useful to offer.

The knowledgebase has very few articles. The ones you get are generally very short on detail. And those details can be, well, less than helpful. When one article asks you to run Device Manager, for instance, it doesn't explain this by saying something like 'press Win+R and run devmgmt.msc.' Instead it just refers to a German-language article which no longer exists for a version of Windows you probably don't have. If you're an experienced Windows and VPN user, you could easily create something better yourself.

If knowledgebase browsing fails to help, you can at least contact Support directly via a web form. The ability to add multiple attachments means it's easy to illustrate the problem with logs, screenshots or anything else that might help, but this still can't match the live chat support available with some top VPN providers.

It's good to see Steganos give a 7-day trial for its VPN, without as much as asking for your email address. Unfortunately for the company, that'll allow most users to see that although it handles the very basics, Online Shield doesn't have the locations, speed, features or configurability to match the competition.