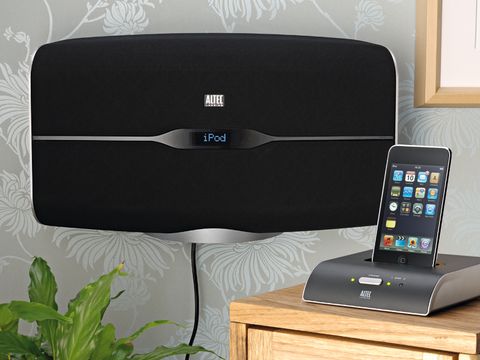 With a wireless range of 100ft, you can liberate your Altec speaker from your iPod dock

An excellent system, but at the price, it should be iPhone-compatible

You can't fault it for style. Altec Lansing's Octiv AIR wireless speaker system looks great on your wall or shelf, and because its sounds are beamed up to 100ft on the 2.4GHz wireless band, you don't have to position the stereo speaker unit near the transmitter.

As well as an iPod dock, the transmitter unit also offers an FM radio tuner with six presets and an auxiliary input, so you can connect any audio device with a 3.5mm headphone socket. You can also add up to seven extra speakers to stream your sounds throughout the house.

Alternatively, you can buy two units and define one speaker set as 'left' and the other as 'right', separating your sound into two channels. It's easy to set up, despite the woeful instructions.

You just switch both units on and they connect automatically. The dock transmitter charges any iPod that utilises a USB connection, and can broadcast music from older, FireWire-charged iPods without charging the device.

But it doesn't support the iPhone very well, forcing you to switch to Airplane Mode to listen to your tunes.

There's no facility to connect the transmitter dock to your Mac via USB for syncing, which is an opportunity missed, but you can broadcast from iTunes through the very useful auxiliary port.

The audio quality offered by the Octiv AIR is extremely good, offering a rich, solid sound with plenty of character. Bass is prominent and deep, but not at the expense of treble.

Indeed, both facets can be independently adjusted from the supplied hand controller, so you can set the mix to suit your tastes.

Since both speakers are housed in the same unit, it struggles to define the shape of the sound, but the detail is strong. And at 40 Watts per channel (or 80, if you use a two-unit stereo setup), you're not short of volume either.

Altec's Octiv AIR isn't cheap, but you're getting a high-quality system for your money. It's equally at home wall-mounted or on a shelf or table, and the iPod dock transmitter takes up very little room.