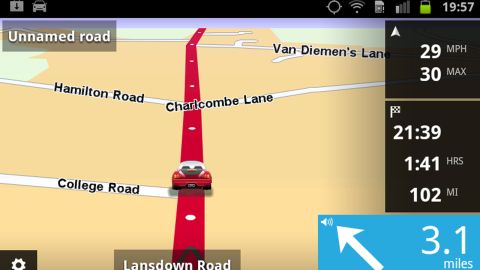 Hidden extras push up the price and there's no joy for HD handsets, but otherwise a great navigation app.

Update: TomTom's Android sat nav app has now been replaced by this one, which keeps the functionality but adopts a new charging system. We recommend you head over and read about that…

For several years you had a choice when it came to in-car navigation. Factory-fit or dedicated device.

But now there's a third option: Full-function, turn-by-turn sat nav apps for smartphones. TomTom's just added to the party with its somewhat belated app for Android.

In theory you get all the advantages of a dedicated nav device, but without the need to buy an extra device or pay for an additional data plan and all that jazz that comes with a high end sat nav device. It's got to be a win, surely?

The proposition only gets stronger when you consider that TomTom is one of the very best nav specialists and Android the most popular smartphone platform. And with the app you get free map updates... for life. What's not to like?

For one thing, there are plenty of alternative navigation apps for the Android platform. Oh, yeah, and lest you have forgotten, Google Maps for Android does the turn-by-turn thing for free. So TomTom for Android needs to be a bit special.

Indeed, this app could be important as the nav industry is in a critical transitional phase. Dedicated devices, otherwise known as personal navigation devices or PNDs look like an endangered species. So it's quality of mapping and associated services that really matter.

TomTom knows this and is very progressive. But partnership with Apple with iOS has hardly started how they hoped. Anyway, interesting times. Let's have a look at what TomTom's new app for android actually delivers. First the theoreticals.

Available to buy now from Google Play (Android App Store on devices with older versions of Android), a wide range of map packs are available. We tested the pan-European map pack.

You pays your money...

Yours for £30.99 it's a big old download, clocking in over 3GB, so you'll need plenty of available storage on your device. Note also we couldn't find any options for choosing the storage location, which could be a problem if you've maxed out your internal memory and we're hoping to stick TomTom onto a storage card.

That said, the download is a one-time hit and critically means you have those maps stored locally. You're not dependent on an internet connection for basic navigation, in other words, though you'll need one for some of the live services, including HD Traffic.

Also, for the record the UK-only map is under 400MB in size, so if you're not planning on a Euro tour, storage needs are far from excessive, and it's cheaper to buy that option compared to the full UK & Europe version.

As it happens, it's at this installation stage that the TomTom app's biggest problem appears. At launch it only works with 800 x 480 and 854 x 540 screen resolutions. So the latest generation of 720p HD handsets with 1,280 x 720 screens are totally incompatible.

That rules out pretty much all of the hot handsets out there at the moment. Hmmm.

Then there's TomTom IQ routes, which takes into account things like historical data for traffic flows to work out the best possible routes, rather than just relying of theoretical information like posted speed limits and simple distances.

Rounding the feature set out are usual TomTom suspects like Google-powered Local Search, an offline POI database and of course seven-digit postcode support. The latter is something you may be surprised to learn still isn't supported by some factory-fit navigation systems.

First up, the TomTom app benefits from smartphone installation straight away thanks to the capacitive touch screens and responsive interfaces on Android devices. It makes for a much slicker, less frustrating experience than the resistive screens users of TomTom's own devices know all too well.

As for the actual graphics and mapping quality, that's never been a TomTom strength if you're looking for Hollywood style 3D visuals. But what matters here is clarity and legibility and just like TomTom's dedicated devices, the app absolutely delivers.

It's not absolutely identical to TomTom's own devices. But where it differs, it's usually better, with a drop shadow here or a transparency there giving the app a slightly more contemporary feel.

TomTom's familiar prompts and cues for upcoming exits and junctions, too. They're probably the best in the business. Certainly, you're much less likely to misinterpret and TomTom guidance cue than that of most built-in navigation solutions.

As with TomTom devices, the POI and Local Search setup is a bit confusing. It's not immediately obvious to new users why you'd use one over the other and can be tricky to use to find things that ought to be easy, like train stations and major airports.

We'd like to see all this unified in a much cleverer single context-aware search function. Elsewhere, extras like the speed camera database and HD Traffic work just like they do on TomTom devices, which is to say pretty well.

That said, we're happy to report it runs pretty smoothly on a rather stately, two-year old Samsung Galaxy S. In fact, even on such an ancient handset it calculate routes pretty niftily.

Exactly how it runs on the latest HD uber phones, we'll have to wait and see. As we mentioned, that's because the app is not currently compatible with 720p HD screens. When it is, it'll be a much more popular option and we'll take another look at it.

We can imagine the route calculation tearing along at quite a lick on the latest dual and quad-core CPUs. Still, it's a very odd oversight from TomTom to launch without HD handset support.

Oh, and don't forget you'll need some kind of cradle and charger to use the app properly, which will add to the cost. But assuming your handset is compatible, you can now have the full TomTom experience without a standalone device.