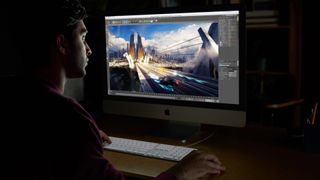 The iMac Pro is an excellent, yet very expensive, professional-grade workstation PC, but it appears that if it gets broken, there's a possibility you'll have a hard time getting Apple to repair it.

Popular YouTube channel, Linus Tech Tips, has posted a video (which you can view below), which claims that after the team's iMac Pro was damaged during the making of a video, it was taken to an Apple Store which then refused to fix it.

An email from an Apple support adviser explained that it could not be repaired due to the limited availability of replacement parts. The claims by Linus Tech Tips are pretty damning, but they are also quite light on detail, so we contacted Apple's customer service department ourselves and were informed that it does repair iMac Pros, but that the repair can be dependant on the extent of the damage, and if the parts were still being manufactured.

A shortage of parts?

The reasoning that Linus Tech Tips was given does sound like it could be legitimate, and ties in with what we were told. Due to the price and powerful components used, the iMac Pro is by its definition a rather niche product, so it would make sense that Apple wouldn’t have loads of spare parts lying around.

However, the iMac Pro launched late last year, so we’d like to think there was some way to get the parts replaced, as initial stock shortages won’t be an issue any more. Clearly Apple is able to replace certain elements of the iMac Pro, but it seems to us that the screen (which was damaged) is a pretty essential part to have replacements in stock.

Considering the price of the iMac Pro, and the fact that it is a workstation designed for professionals whose work, and livelihood, depend on having it, if Apple is not able to fix its, that's fairly inexcusable.

However, it should be pointed out that while the screen was visibly damaged by a drop, in the video posted below Linus Tech Tips also admit that the logic board and power supply unit needed replacing as well, which suggests the repair process could be pretty complex and pricey.

In fact, as the Apple Insider website calculated, the cost of fixing the screen, logic board and power supply unit, as well as paying for labor, could easily end up being considerably more than the original price of the iMac Pro. This would mean that Apple, or any third party repair shop, would be unwilling to fix it.

This is information that Linus Tech Tips either skirts around, or outright avoids mentioning altogether.

Apple apparently told Linus Tech Tips to contact a third party Apple Authorized Service Provider to fix it, which also refused to repair the device, this time stating that Apple has not offered certification courses for servicing and repairing iMac Pros.

However, it appears that there is an online training and learning resource provided by Apple to repair iMac Pros, with service parts being available for the workstation since January. An explanation of this may be that the particular repair shop Linus Tech Tips went to had not yet got its certification, therefore it was unwilling to fix the machine.

Another theory is that even if the shop had the required certification, it was using it as an excuse to get out of having to take on a complex and expensive repair. In the video, Linus Tech Tips does not say if the team tried any other Apple Authorized Service Providers.

Another reason for Apple refusing to fix the iMac Pro could be because it’s not happy with how it was damaged. It occurred during a video where one of the presenters for Linus Tech Tips took apart the iMac Pro, and when replacing the screen accidentally dropped it.

Apple’s terms and conditions for repairs says that it will not service products that have been damaged due to “unauthorized modification… faulty installation, repair, or maintenance by anyone other than Apple or an Apple Authorized Service Provider."

As the video clearly shows, this is exactly what they were doing. However, Linus Tech Tips isn’t trying to get the iMac Pro repaired for free under its warranty, which the above covers, but is willing to pay for the repair in full.

MacRumors contacted a source that confirmed that “Apple Authorized Service Providers are permitted to deny service for any product that has been opened or modified by a customer, regardless of warranty, both for safety reasons and to avoid responsibility if the machine cannot be fixed.”

It's now been two months since Linus Tech Tips' iMac Pro was damaged, and it apparently still hasn’t been fixed. So, if you own an iMac Pro –and this should probably go without saying – try not to break it, and definitely do not attempt to open it up and modify it.

The whole incident has been dividing the internet, with some people siding with Linus Tech Tips, and others understanding Apple's position. It doesn't help that Linus Tech Tips' video is both inflammatory, accusing Apple of being anti-consumer, while also being cagey with the finer details.

We can also see why Apple and its third party service providers would be wary of taking on such an expensive repair, especially considering the way the iMac Pro was damaged. On the other hand, if you spend that much money on a device, and are willing to pay any amount to fix it (as Linus Tech Tips is claiming), then it should get fixed.

We spoke to Apple, which is not commenting on this saga.