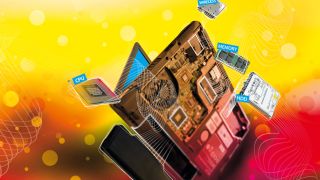 When I was young, I tried to fix a broken bicycle dynamo by hitting it with a hammer. When that didn't work, I hit it again, and again, and again, until there was nothing left but a twisted mass of useless metal.

I learned two lessons that day. One, there was no way that dynamo was going to go back on my bike again. And two, I'm not really cut out for practical things. You know the bit at the beginning of every hospital drama on TV where a bloke does something ordinary, but in a really obviously dangerous and stupid way? That's me.

"Darling, I'm just going to climb this tree with a chainsAAAAAAAGH!", I'll say. "I'll just pour these chemicals into the hot barbecAAAAAAAGH!" "I'll just use this nail gun to attAAAAAAAGH!" If B&Q sells it, I've probably been injured by it.

If you're ever in A&E and you see a guy with a bucket jammed on his head and half a garden fence embedded in his back, come and say hello. It's almost certainly me.

It wouldn't be so bad if any of my injuries were interesting ones. In action movies, heroes always impress attractive potential partners by talking about the stories behind their scars. "I got this one when Captain Evil shot me with a spear gun while I was punching a shark," the hero might say. "What about that one?" the love interest will say, pointing to a giant scar that runs from shoulder to stomach.

"Oh, that's just a scratch," he'll say. "I got that when I rescued those orphans from inside an erupting volcano, in space, while being attacked by a radioactive alligator." "You're so brave!" the love interest will cry. "Let's have sex!"

You don't get that kind of reaction in my house. My worst scar comes from fitting the backplate to a desktop PC that I was building. You know the bit I mean - the shiny metal plate that goes around the audio and USB ports? I damn near lost a finger fitting one of those.

As I blundered around the kitchen, wailing, bumping into things, shooting jets of bright red blood all over the cupboards and shouting "WHERE THE HELL ARE THE BLOODY PLASTERS?" it's safe to say that my wife wasn't thinking "Ooh! Now that's sexy!"

Unlike most of me, that PC is still working perfectly. If a dolt like me can manage to build a functioning PC without losing too many functioning limbs or burning down the house then anybody can do it - and I think everybody should.

A few months ago I argued that buying a new PC is no fun any more. Building one, though? That's a hoot. All you need is some time, some money and some plasters.

There are three stages to building your own PC: pretending you're rich, pretending you're Simon Cowell, and pretending it's Christmas. The first bit is top fun, because that's the bit when you choose 'price: high > low' in online shops and specify a 3.46Ghz Core i7-990X Extreme, a top-end Radeon and a 1TB SSD.

The second stage, pretending you're Simon Cowell, takes place when you realise that you've only specced three components and you're already facing a bill of £4,390. That's when you start what some might call 'managing expectations', and others would describe as 'not being so silly'.

Getting a good deal

Instead of £800 processors you start looking at £400 ones, or £200 ones. Instead of wallet-emptying terabyte-scale SSDs, you decide that it's smarter to go for 1TB of hard disk and maybe a small SSD to boot. Instead of a case made from diamonds and packed with 4,000 LEDs, you go for something matte black with a big blue lamp on it.

I find that this stage is much more fun and considerably less depressing if you make each component justify its existence, ideally in a squeaky mouse voice. I'm no longer cutting my spec to fit my budget: I'm Simon Cowell, and I'm judging mice!

Once you've chosen your final spec and enjoyed the emotional rollercoaster of best-pricing (this bit's £5 cheaper! Aaagh! £10 delivery charge! This site is half the price of anybody else, is in a country I've never heard of and looks like it was knocked together by a lunatic! I can definitely trust this one! And so on) you can sit back and wait for the best bit: pretending it's Christmas.

If you choose wisely and spread your shopping far and wide, you can ensure that for at least one day every single parcel delivered to your street is for you, and unlike real Christmas you know that every 'present' is going to be something good. "What's in here?" you might ask. "Could it be horrible socks? No! It's a quad-core!" You can keep this bit going for days if you like.

Finally, it's time to bring everything together and build your PC. This bit's easy and fairly unremarkable, bar the horrible moment when you click the heatsink into place and think you've cracked the motherboard (something that gets me every time), building a PC isn't much harder than Lego.

And when you're done, and you've wiped all the blood off the motherboard, and you've counted all your digits, you can sit back, look at your handiwork and say: I made that.