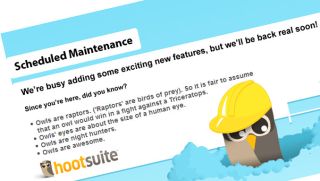 Business may be under-estimating the lack of forgiveness by consumers in 2012 for poor website experiences.

A survey by Internet hosting business 1&1 Internet found consumers are avoiding business sites where they are regularly inconvenienced by slow-speeds and poor response times.

The survey of 1500 UK consumers, found more than a third (38%) have decided to avoid a company in the future as a result of finding a faulty website and half of consumers were regularly inconvenienced by websites 'down for maintenance.'

The 'British Web Survey' found nearly three-quarters (71%) of UK web users are still regularly inconvenienced by faulty websites. Over half (59%) see large variations in the reliability of the websites which they use.

The data also suggests that only 1 in 4 consumers recognise improvements since 1&1 last conducted the study exactly 5 years ago.

There's also a change in attitude to the way UK consumers view a poor web experience and their perceived attitudes to technology. Nearly a half of those polled (44%) said they were more critical towards website errors today than they were five years ago, and 39% believe that they have become better able to judge whether a website contains faults over past 5 years.

One in three Britons report that they regularly feel anger, worry or stress as a result of using a faulty website. The most worrisome aspect is doubts over whether an online transaction has been completed properly, with 44% having been affected.

Graham Jones, Internet Psychologist, advises, "Users of your web site are less likely to return if your site breaks or doesn't work properly. People get frustrated by slow loading and by the addition of technologies that work only in certain circumstances. If you have shopping carts or other "add-on" services, test them and test them again to be sure they cannot break or cause problems. Similarly, if you have forms – make sure they work".

As part of the study, 1&1 compared the level of faults experienced by users across Europe, and typically the UK appeared mid-table. However unlike the recent Euros, Spain was bottom of the table, with 75% of Spanish customers encountering errors. While the Germans were on top, getting full marks for efficiency with 61% of German customers experiencing errors.