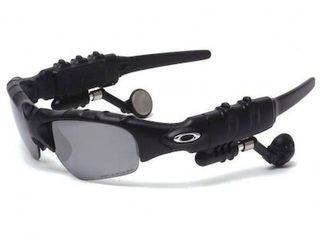 As a person who is lucky enough not to have to wear glasses, putting them on for the sake of technology is something that fills me with dread.

It wasn't always this way. Many movies convinced me as a child that wearing glasses would be the future – whether it would be because the future was filled with robots sent back through time who had to cover up their red eyes with a pair of Ray Bans, or that watching TV through eyewear would become common place (like Marty McFly in Back To The Future Part II), it seemed inevitable that I would don glasses at some point in my life to enjoy my technology.

And then I did and it sucked. And that's why I just can't stop thinking that if Google does release its AR glasses, they will disappoint more than your parents promising you new specs and coming back with a bag sporting the letters NHS.

Glasses will always act as a barrier to tech. It's the case with 3D in the home and no matter how nice and lightweight the glasses get, whether they are passive or active, the whole addition of specs means that you will never have true immersion.

Which leads us to the whole concept of AR glasses – eyewear with the added addition of augmented reality.

The key to AR is that it enhances the outdoors with digital triggers, such as maps and information, which at the moment is confined to holding up your smartphone and pointing it at things.

No matter how advanced this technology is – and there are apps like Layar trying their hardest to make it work – it's something of a gimmick and currently a lot harder to use than just using your phone to search for information.

The idea that Google is hoping that consumers will embrace AR by putting it into a pair of glasses, which can be controlled by the movement of your head and eye blinking, is then a little ludicrous - albeit a concept we have encountered before.

Not only will this mean that the brave individuals who actually decide to wear them outside will be doing bad Stevie Wonder impressions, once logged in they will be constantly updated with information about the world around them.

Every coffee shop they pass, information will ping up, every shop they go near they will be prompted with digital discounts.

It's not as if this barrage of information will be any more dangerous than someone trying to text and walk – given it's a heads up display and not a heads down one it's actually probably better – but there's no way Google will be able to make the technology as user friendly as looking for info on your smartphone, which makes the concept of AR glasses that bit more redundant.

Even if Google gets it right, the scope to use them will be very limited. You won't be allowed to wear them while driving a car or riding a bike, and if they are modelled on a pair of Oakleys then they will be essentially be sunglasses, so you are not exactly going to wear them when there isn't any sun.

And for them to really work, they would have to run on 3G or at least tether to a smartphone that's got 3G – otherwise you would find yourself with a pair of sunglasses that can only be worn inside.

Donning a pair of AR specs will not make you the Terminator, or Marty McFly, or even Tom Cruise in Minority Report and that's the biggest problem with them – they will never live up to what we all dreamt of as kids.

Sorry Google, but if your AR glasses are real then I'm filing these next to the Sinclair CV, the As-Seen-on-TV Hat and the lovely but ultimately rather silly Segway.