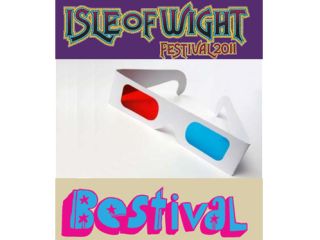 3D festivals. What next?

If you can't afford to trek to a festival this year, Sky Arts is on hand to bring you the full three dimensional experience, set as it is to broadcast the Isle of Wight Festival and sister-gala Bestival in 3D this summer.

Taking place in June, the Isle of Wight festival gets the dubious honour of being the first festival to be broadcast in 3D.

Bestival, meanwhile, will enter the third televisual dimension in September this year.

"The festivals we have chosen to partner attract some of the biggest and most exciting acts," said John Cassy, channel director of Sky Arts and Sky 3D.

Big and exciting acts like Kings of Leon, Foo Fighters and Pulp which are all set to play the Isle of Wight festival. Not to mention Mike and the Mechanics.

"We are particularly excited about Bestival and the Isle of Wight festivals, where we'll break new ground by bringing them to the life through 3D.

"Broadcasting live in 3D is an amazing opportunity to bring viewers closer than ever to the real festival experience."

You'll need to provide your own mud, warm, over-priced beer and overflowing toilets to make it realistic though.