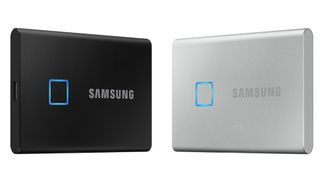 Storage fans have a new high-end option to consider after Samsung launched its follow up to the popular Samsung Portable SSD T5 at CES 2020.

The new Portable SSD T7 comes in 500GB, 1TB and 2TB versions and carries a three-year warranty, with an additional version adding a physical fingerprint reader while keeping the same aluminum chassis.

Both will feature a NVMe SSD drive paired with (most likely) sixth generation 136-layer V-NAND and a USB 3.2 Gen 2 bridge which, Samsung says, will deliver speeds of up to 1.05/1GBps in read/write performance.

It is still far cheaper than other touch capable portable SSD like the Apricorn Aegis Bio 3 which costs almost three times more than Samsung’s newcomer but does come with additional security features like FIPS certification and a more ruggedised construction.

Most importantly though, it should be far faster than either of the previous generation or its closest rivals due to the move from SATA to NVMe.