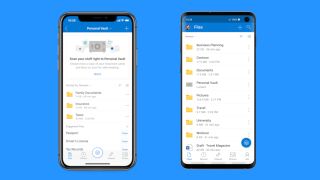 In an effort to help users protect their most important and sensitive files, Microsoft is adding a new secure storage area to OneDrive called Personal Vault.

Personal Vault is a new protected area in OneDrive that users can only access with a strong authentication method or by using a second step of identity verification such as their fingerprint, face, PIN or a code sent via email or SMS.

Files locked in your Personal Vault have an extra layer of security which can hep protect them if your device falls into the wrong hands or someone gains access to your account. However, this added security doesn't mean added inconvenience as all of your files stored in Personal Valut can be easily accessed via the web, on your PC or on updated iOS and Android devices (iOS 11.3 and above, Android 6.0 and above).

Microsoft designed Personal Vault to be easy to use and users will just have to enter a PIN or use their fingerprint, face or an email or SMS code to unlock and access their files. The new secure storage area can also be unlocked with the Microsoft Authenticator app.

Users will also be able to use the OneDrive mobile app to scan documents, take pictures or shoot video directly into their Personal Vault. This can be particularly useful when you want to capture something too sensitive to remain accessible in your device's camera roll.

Personal Vault even automatically relocks on your PC, smartphone or online after a short period of inactivity. Once it has locked, any files you were using will also be locked and will require reauthentication to access.

The new feature will begin rolling out soon to users in Australia, New Zealand and Canada, though Microsoft expects Personal Vault to be available to all OneDrive users by the end of the year.