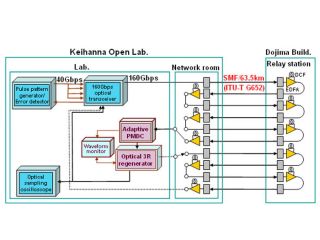 For when you absolutely, positively have to download four movies a second

Most of the breakthroughs in high-speed data connections that we hear about are of purely theoretical value in the short term, but Oki Japan seems set to buck the trend by committing to making its latest technology commercial in the near future.

The company's success in creating a 160Gbit/s optical connection over several hundred kilometres has led it to promise it will be "commercialized in 2010 or after".

Other fat data pipes have been shown to carry gigabit-class data, but Oki's method is different in that it can sustain the throughput over virtually unlimited distances.

The key lies in something called optically regenerated transmission, a technology that prevents signal degradation with distance.

Conventional methods for long-distance connections require optical amplifiers every 50 to 100km. These convert optical signals first into electrical pulses and then back again, so signal and timing distortions are corrected.

With an eye on the headlines, the company says its new data hose can supply the equivalent of four full movies every second, although commercialisation will not, of course, involve domestic consumers at first.