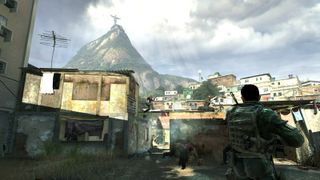 COD: Modern Warfare 2 in the running for a possible Xmas number one slot

Paddy Power has just published its odds for the Xmas number one videogame in 2009, set to be Call Of Duty: Modern Warfare 2 according to the leading bookmakers.

Of course, EA and Ubisoft are always close behind Activision's major holiday franchise, with both Assassin's Creed and FIFA 10 only slightly behind the new

"When the full weight of Activision's marketing machine kicks into gear we're in no doubt that Call Of Duty: Modern Warfare 2 will enjoy the lion's share of the games market this December," a Paddy Power spokesperson told MCV.