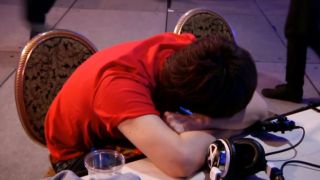 Embarrassment ensued for player Woshige at the Evo League 2015 Championships in Las Vegas this weekend as he leapt up from his chair to celebrate a knockout win over rival Ogawa while playing the game Guilty Gear Xrd SIGN.

What Woshige forgot was that he actually needed two wins, and as he lingered over the premature celebrations, Ogawazato jumped in and pummelled the vulnerable avatar to pieces, thereby securing the win for himself.

Evo League traditionally broadcasts live, streaming on the Internet for those who can't make the Vegas trip, so of course the clip has happily found its way onto YouTube for everyone to revel in. Check it out below. (via CNET)

In other Evo news...

Also over the weekend, actress Jamie Lee Curtis revealed on Twitter that she attended the championships with her son, but did so in full incognito cosplay. In fact, her whole family cosplayed as characters from Street Fighter and Tekken, and no one was the wiser.

Curtis dressed up as Vega, and is a massive fan of the Street Fighter games (her main is Cammy), which was also played competitively at the event.