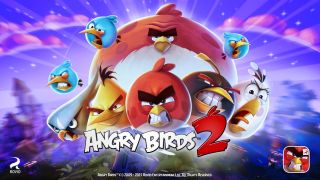 Update: Looks like people are pretty excited about the Angry Birds sequel.

Considering the first game was the most downloaded mobile game ever, this doesn't come as a huge surprise.

That's right, a sequel to the popular fowl-flinging game is headed to mobile devices.

New spells including blizzards, magic ducks and hot chili peppers are now available to let you rack up a higher Destruct-O-Meter and earn more birds.

Players can also challenge other gamers worldwide and, for the first time, choose their own bird to chuck.

Familiar characters like Red, Chuck and Bomb have returned, while a new bird named Silver is joining the flock with her fancy flying skills.

Although the game remains free to play, earning gems for extra birds, lives and tickets can be bought. Players can simply go through the game by completing quests or watching ad videos for the rewards.

Angry Birds 2 can be downloaded from the Apple App Store and Google Play starting today.