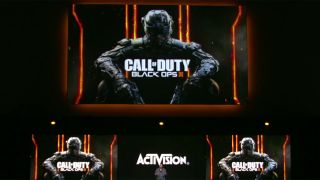 After a surprisingly not appearing at Microsoft's press event earlier in the day, it seems Sony has scooped up some exclusive rights with Activision for Call of Duty: Black Ops III.

On the Sony stage at E3 2015 we got our first look at the futuristic campaign of Black Ops III. The game puts you in the shoes of an elite squad of cybernetic soldiers compete with robotic arms and high-tech weaponry.

Did we mention this will be the first Call of Duty game that supports full four player co-op? Unfortunately, there wasn't any confirmation of Zombies just yet.

The gameplay demo was situated in a particularly brown battlefield full of mobile, robotic weapons platforms (think turrets on a moving tripod).

In another surprising first, PS4 owners will also be the first to get all the maps in Black Ops III. What's more, those on the Sony platform will also get first dibs on the multiplayer beta rolling out this August.