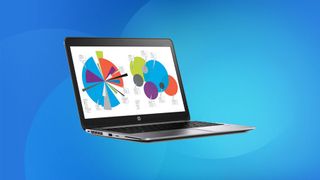 Intel's latest is inside

Notebooks packing Intel's fifth-generation Broadwell processor are beginning to race out of the traps, with each one aiming to out-skinny the competition.

The business-focused HP EliteBook Folio 1020, a 12.5-inch notebook with a 2560 x 1440 pixel-resolution QHD display that houses Intel's Core-M chip inside, is one such device.

Like the Lenovo Yoga 3 Pro, the first consumer Ultrabook to come with Broadwell that was outed in November, HP's new device is plenty portable, tipping the scales at a svelte 2.2 lbs and measuring 15.7mm at its thickest point.

Unlike the Yoga 3 Pro (which many assumed was fanless, but isn't), the EliteBook Folio 1020 is completely fanless, allowing it to run at a whisper, according to HP, which reckons that you'll squeeze nine hours of real-world use out of its battery.

It comes with a number of security options in tow, including HP Client Management Solutions and optional LANDesk and Intel vPro technology, in addition to a Trusted platform Module (TPM), pre-boot authentication, fingerprint reader and HP's data-guarding Sure Start Self-healing BIOS software.

Other specs include a 720p webcam, front-facing speakers with HD Audio with DTS Studio Surround, HP Noise Reduction Software for making conferences in noisy rooms that bit less frustrating, and a keyboard that provides "consistent key response" - whatever that means.

The HP EliteBook Folio 1020 is set to hit the shelves in February, with pricing yet to be confirmed.