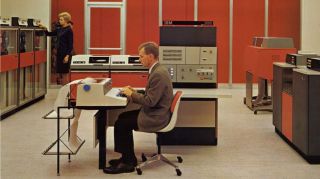 Nice retro picture of the System 360

They are not as pervasive as personal computers and not as ubiquitous as smartphones but without mainframes, the world, as we know it, wouldn't be the same.

And as the most popular mainframe family, IBM's System 360, turns 50, it is worth looking back at the role they play in our daily lives.

Mainframes had been around for far longer though – UNIVAC I (UNIVersal Automatic Computer I) is widely acknowledged to be the first one - started to kick off in the early 1960s worldwide as demand for large scale, number-crunching operations increased.

Of the three computing units traditionally popular in the 40 years up to 2000, micro-computers, mini-computers and mainframes, only the later remained relevant.

Altogether, mainframes account for 1.1 million transactions per second, or 34 trillion every year. That's a dozen more than all tweets, Facebook likes and Google searches carried out over the same period.

Mainframes are behind most mundane number-crunching processes around us: from credit card transactions to ATM withdrawals as well as weather reports and flight bookings.

And while enterprise usage of cloud storage has been growing exponentially, IBM estimates that four-fifths of the world's corporate data still resides on a mainframe.