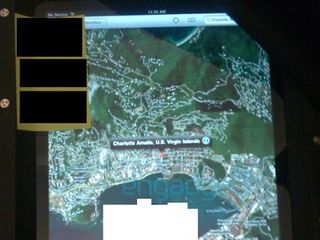 Apple launches its tablet computer at 6pm GMT at an event in San Francisco today.

The technology industry is rife with rumour, speculation and half-cocked theories about and analysis of the device, before Steve Jobs has even announced its existence.

These latest 'spy shots' (courtesy of Engadget) look plausible enough. But then again, we'll have to wait till later tonight to see if they are the real deal or not.

The picture sure looks like what most folks seem to be expecting – an oversized iPhone style device, that looks to be running a version of the iPhone's Safari internet browser with tabs.

In the upper left of the screen there is a message that says "No Service," which suggests 3G in addition to a Wi-Fi logo.

We'll be covering the Apple event from San Francisco later this evening. Be sure to check back in just after 6pm to follow proceedings as they happen.