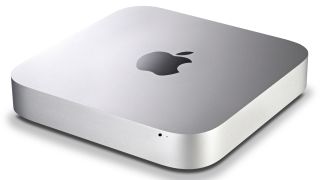 So basically one of these with a projector lens, right?

Apple's next generation of Macs may drop the monitor and put everything on your wall instead.

A patent for a "desk-free" computer was just awarded to Apple by the US Patent and Trademark Office, proposing something that's neither desktop nor laptop.

Instead, the device is essentially an all in-one PC that would fire the screen display onto a surface using an built-in projector output.

The projector would offer an advanced optical engine for extreme-angle projection so you could have the box close up to a wall while still keeping a pretty decent sized picture.

The CPU and other internals would be packed inside the projector box, so all you'd need to do is find a suitable surface to place it on.

There would also be no cables as the system could be powered via inductive charging, according to the patent. Meanwhile, the mouse, keyboard and other peripherals would connect using Bluetooth.

With Steam trying to push the PC more into the living room, could this be Apple's way of trying to do the same?