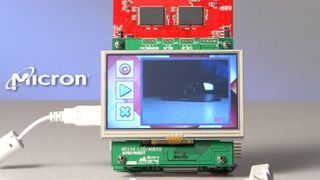 Micron Technology has begun production of a brand new kind of memory for mobile devices that could oust silicon storage from the top spot.

The company is putting together its first commercial phase-change memory (PCM) modules suitable for phones.

Replacing traditional flash RAM chips, PCM works by switching between crystalline and amorphous states. While this overly-simple explanation may still be beyond us, it does bring promising benefits.

The technology is capable of much higher data speeds than conventional NAND flash as it doesn't need to erase old data before re-writing. It also has the potential to retain data when power is switched off, spelling an end to lost work due to power cuts or when you accidentally kick the power cord out.

The first memory modules that Micron Technology is rolling out are a very modest 1GB in size, sitting on a chip alongside 512MB of standard RAM.

These initial units are aimed at feature phones, while plans to get the tech into smartphones and tablets are underway.

There's a basic demonstration video of the new memory below.