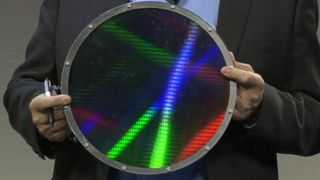 System memory (or RAM) is the cheapest replaceable storage solution in a computer. 32GB can cost around £140 and supercomputers use a lot of them, terabytes at a time in many cases.

Researchers at the MIT have come up with a more affordable solution for the so-called HPC (high performance computing) market - for now, at least.

They intend to replace RAM (Random Access Memory) with a smarter solution that uses much cheaper flash memory (1TB for about £240) and can do some of the work on the controller.

Each controller comes with a FPGA with 500GB of flash memory, each being reprogrammable depending on the application being run.

RAM on PC will live on for now

The initial gains appear to be most visible in databases or big data applications like Image Search, Google PageRank and Memcached.

For now though, it is unlikely that this solution will replace dynamic RAM any time soon. What is likely to happen is that system memory and main memory will merge.

HP is already working on Memristor, the Graal of unified memory, which was supposed to be one of the main features of The Machine, its revolutionary new computer.

The project was sponsored by Quanta, Samsung and Xilinx, all of whom have a keen interest in the research.