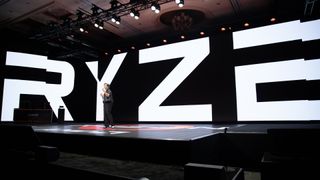 AMD has made big waves at Computex by showing off its Ryzen 3rd Generation and Epyc processors (not to mention Navi graphics cards), and Wall Street analysts appear to agree with the general sentiment that these products are going to cause even more trouble for Intel.

AMD’s Ryzen chips have already gone from strength to strength of late, and have capitalized on Intel’s manufacturing woes, and although the latter production issues should be resolved soon – Intel has mentioned that everything should be smoothed over by the third quarter – analysts still believe AMD currently holds all the processor cards with its incoming 7nm (Zen 2) CPUs.

Kevin Cassidy, a semiconductor equities analyst at Stifel, reaffirmed his ‘buy’ rating for AMD and said that: “[Zen 2 will allow AMD] to accelerate its PC market share gains due to higher performance, lower power usage, lower cost and ease of upgrade.”

Cassidy further noted: “This announcement represents the first time AMD has taken the desktop CPU process-technology and performance lead from Intel in its 50-year history.”

Matthew Ramsey, an analyst from Cowen who deals with the semiconductor arena, observed: “Our team attended CEO Lisa Su’s Computex keynote Monday in Taipei that highlighted several 7nm products set to launch over the next six months across all of AMD’s served markets. We anticipate these products will drive above-consensus growth, share gains, margin expansion and AMD share appreciation.”

Ramsey highlighted Epyc server processors in particular, anticipating that AMD will do ‘very well’ in the data center market and cloud computing with those heavyweight 7nm chips, and currently has an ‘outperform’ rating on AMD’s stock.

Ramsey also felt AMD stole the show at Computex, as MarketWatch reports, and we are in agreement with that following our detailed coverage of the event.

Clearly, then, Intel needs to fight back and regain some momentum, because as we’ve seen of late, CPU sales seem to be heavily in favor of AMD (with Ryzen chips selling twice as many as Intel’s, no less, at least according to figures from one retailer).

Perhaps unsurprisingly, AMD’s stock shot up almost 10% yesterday, and the company will be feeling pretty good about things no doubt, particularly on the processor front.

Naturally, we’ll only know exactly how good these Ryzen 3rd Generation CPUs are when we get them in for testing, though.

Equally, on the GPU front, the hope is that Navi (Radeon RX 5000 range) will also be able to grab some turf back from Nvidia’s GeForce graphics cards, with AMD claiming an incoming RX 5700 offering will outdo the RTX 2070 to the tune of around 10%. Again, we shall just have to see if those promised performance levels stack up, and of course pricing will be key.