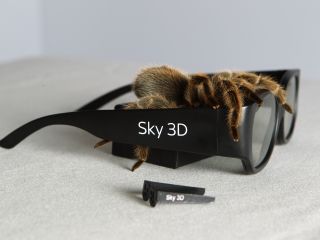 We'll be honest - we weren't going to do this story until we saw this image, and the little spider sized 3D specs

Sky is hoping that its 3D technology is realistic enough to help cure people's fear of spiders.

Sky is showing a 'creepy' new video which it describes as 'ultra-realistic' and is apparently hoping that the sight of taratulas crawling out of the screen towards you will help cure arachnophobia.

Are we alone in wondering if that's the most effective solution?

The film is being shown at Liverpool's BugWorld Experience in the build-up to the consumer launch of Sky 3D on 1 October.

A range of spiders – from domestic and wild bugs, to nasties such as false widows and tarantulas – are included, but perhaps even creepier the narration is being done by Ralf Little.

"We wanted to get a shot of loads of spiders in the bath, but we also needed props in the bath to give it the 3D depth it needed," said Sky's creative director, Neil Torbit.

"Of course all the spiders hid under the props! We had four people trying to coax them out with sticks as well as blowing them with straws, he added.

"In the shot you can only see about 12 spiders but there are actually about 25 in there somewhere!

"A bit of air administered via a straw became our major directing tool for the spiders. We could direct them when to move and what direction to go."

The film will be shown at BugWorld until 5 September.