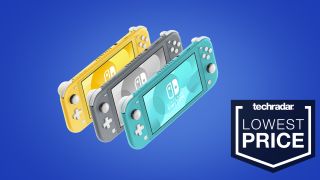 That's a fantastic price on the cheap Nintendo Switch alternative, and one that may well be difficult to turn down - even if you're simply after a secondary console. The simple design and cheap price tag makes the Switch Lite a perfect purchase for younger players, with a range of colourful designs in stock to keep things fresh. You won't be able to dock your new console and display your gameplay on the TV, as the Nintendo Switch Lite has been designed as a handheld-first device.

That means you're paying considerably less while still gaining access to the latest Nintendo games - a perfect proposition if you're not fussed about playing on the big screen. If, like many Switch owners, you don't feel the need to dock your console, the  later model offers a fantastic price reduction over the original, and with today's Nintendo Switch Lite deals bringing that cost even further down there's every reason to take the leap today.

Not in the UK? Scroll down for the best Nintendo Switch Lite deals where you are.

If you're looking to hit the ground running with your new console, you'll want to pick up some games as well. With such a low price on the table from Currys, a lot of the bundles on offer right now aren't saving you so much cash. That means you'll be looking to Nintendo Switch games deals to net a cheap title to get started with. Nintendo's latest and greatest are listed below, alongside the best prices we've found right now.

We're always on the lookout for the best Nintendo Switch sales, so if you're looking for the full console head over to browse the latest bundle deals.