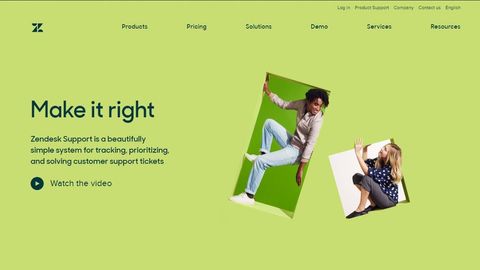 A very powerful and easy to deploy helpdesk solution that’s undermined by a pricing model that makes some critical features only available at the more expensive tiers. If you can afford the high cost, this is still one of the best solutions available.

Zendesk has built a solid reputation with a suite of cloud-based tools that are for businesses in the healthcare, financial services, manufacturing, media, government and retail sectors.

While you can license all their products as a combined suite, in this review we’ll be looking at their helpdesk solution, Zendesk Support.

The first important thing to realise about Zendesk support is that alone, this is a ticketing support solution that is meant to be rebranded by the business using it to provide a custom service across a wide range of channels.

If you want the full Zendesk knowledge base, live chat or VoIP telephony they are all sold as additional Zendesk solutions, but only the ‘Lite’ versions are included in the Support feature set.

The channels supported by default are web, mobile, email, Facebook and Twitter, though new ones appear regularly.

Those needing help are directed to ticket generating forms that can be customised to the licensee’s business needs, and a single account can have multiple brands or services that they’re supporting with a common database.

As with most ticketing solutions, Zendesk Support allows the creation of SLAs, business rules, automation and customer stratification.

One interesting feature which isn’t often seen is that an administrator can use ‘guided mode’ to prime an agent’s ticket bucket. The thinking behind this micromanagement tool is to address those agents that pick easy to resolve tickets and leave the more challenging ones to their workmates.

For larger operations where agents are graded by knowledge and have supporting expertise, Zendesk has skills-based routing and collaboration.

But it should be noted that collaboration isn’t a standard feature and is priced as an addon.

At the back end of the ticketing process is an analytics model is used to measure and improve customer service and provide a complete breakdown on agent performance and overall support metrics.

Some important features are also only available via the top tier plans. And, only Elite tier customers get all the things that Zendesk support offers, like advanced security and encryption.

One of the few missing features is an asset register, critical for those using this software for IT help, needing to offer ITIL compliant support.

But this feature and others can be added via the Zendesk Marketplace, where a wide range of supporting apps and integrations exist. And, many of those are free add and use.

Currently, there are 645 free apps, and another 100 or so that are either a monthly subscription or a one-off payment.

These can link Zendesk Support to Slack, Zoho CRM, Google Hangouts, and dozens of other business applications. And, a good number have been created to link sales, marketing and survey tools to tickets and their contacts.

The similarities between the web interface of Zendesk Support and a dozen other web-based helpdesk tools are striking. It’s a menu down the left and contents on the right scheme, where the speed of page response is more important than aesthetics.

Our only reservation is that you need to become familiar with the icons. Because those who optimised the system performance considered labels an unnecessary evil, it appears.

Those that access the system via a mobile device, iOS or Android, can download an app for those platforms.

The features of the mobile tool are very limited when compared with the full web solution, as you can’t access any of the special settings or functions. The app is mostly limited to ticket handling and doesn’t contain all the features and controls that the web-based version offers.

Tablet users should probably use the web and not the mobile app, if they want access to more functionality.

Security on Zendesk Support is a mixed bag.

Because you are encouraged to start using it merely by providing an email address and simple password, and that you can have better options isn’t mentioned.

Those that navigate to the security settings will discover that they can create single sign-on options for their agents and admins that use either Microsoft or Google. These both offer two-factor authentication (2FA), if it is active on those accounts.

Zendesk also has internal 2FA, and you can limit any session to a limited time window to make sure that users aren’t getting others to use their account.

That’s better than just a password control, irrespective of how often you enforce new codes.

We also noticed that each time a mobile device accessed the service this was recorded, and IP restrictions can be applied if you don’t want agents using personal equipment.

In addition to agents, the system also supports security for end-users either with a password or via Google, Microsoft, Twitter or Facebook accounts. And, you can also implement Single Sign-On (SSO) using external authentication.

While no security system is entirely foolproof, these options all contribute to a reasonable level of confidence that when a ticket is generated and answered, both parties are who they say they are.

What thrilled us less was that to get the best security and encryption requires signing up for the top tier plan. Surely Zendesk wants all their customers safe, and not just those paying the most?

Encryption should be an option on all paid tiers, period.

Exactly how much you pay per agent for Zendesk Support is very dependent on what plan you choose, based on the features required.

Essential can generate tickets via email, social channels and via a web widget, Team adds custom business rules and performance dashboards. Those that want a multilingual helpdesk and analytics need Professional, and Enterprise has skill-based routing and multiple branding.

For those willing to splash out on Elite tier, they can have unlimited ‘lite agents’, advanced security options and can also decide geographically which data centre they will use.

All Support plans come with the Lite versions of Chat, Talk and Guide, and each of these has multiple levels of functionality that cost extra per agent.

The temptation is there to spend a large amount per agent if you don’t consider the cost implications of upgrading.

What you are encouraged by the pricing model to do is choose the ‘The Suite’ that has either Professional or Enterprise functionality across all the modules.

This option works out cheaper if you use any of the enhanced versions, and you get all of them in the price.

In whatever way you slice and dice the costs, to get the features that most businesses will want aren’t cheap on Zendesk Support. And those costs compare badly with competitor solutions where many of the paid-for extras and higher tier functionality comes as standard.

The consensus of the users is that this is an excellent platform that can be deployed quickly and efficiently, and the only thing real obstruction to a bigger slice of the helpdesk market is the price.