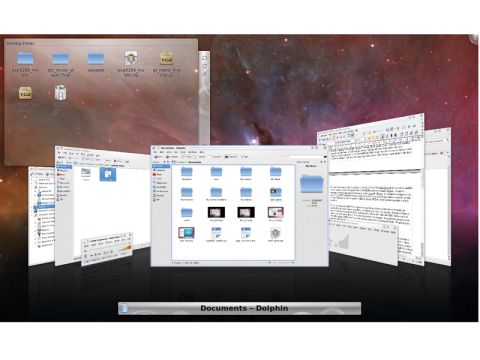 KDE now supports shiny new widgets, with more visual effects than you can shake a stick at

You might wonder why we've chosen to look at the 4.3 release of KDE and not 4.0. The answer is that 4.0 should never have been released – it suffered from instability and a much reduced feature set.

After 18 more months, 4.3 is the release that 4.0 should have been, and it's now stable enough for critical use. KDE is also now stuffed full of eye candy.

There's a new desktop theme called Air, but we weren't too keen on it. It's all light grey and washed out, and we preferred the higher contrast of the Oxygen theme.

It's also a crime that there's no WebKit integration for KDE's web browser. WebKit started life on KDE and it's staggering that the developers can't re-integrate the rendering engine back into the environment.

The launch menu is difficult to use and KDE needs to work on a more effective replacement which brings over a few more features from Gnome Do.

There are dozens of other additions too, but overall none are as important as KDE's new-found stability.