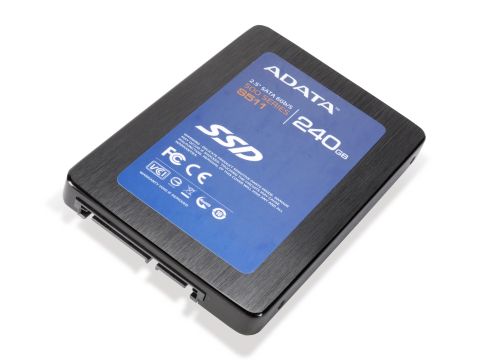 The fastest read times available on the market, let down slightly by write speeds

Hello, A-Data S511. What's that? You can read and write at over 500 MB/s? Why, that's quicker than a spelling bee champion on MDMA. In fact, in both synthetic and real-world benchmarks, this solid state drive (SSD) is quicker than OCZ's similarly SandForce 2281-controlled OCZ Vertex 3.

The SandForce 2200-Series controller is at the same time a light-bringer and harbinger of doom.

The read/write speeds it offers are staggering, and verge dangerously near the SATA 3 port's maximum throughput of 600 MB/s.

Not only does the SSD deliver great performance to you in PC user land, it puts pressure on manufacturers to deliver a faster, better interface.

Corsair was left red-faced after being forced to recall its Force 3 series SSDs, respectively. It all stinks a bit of Intel's B3 revision fiasco, and has probably put some enthusiasts off the SandForce 2200 series permanently.

Which is a shame. Now the controller issue's been identified and remedied via firmware and hardware revisions, we can once again focus on that jaw-dropping performance.

And since the OCZ Vertex 3 has been the pace setter for all SSDs until now, the A-Data S511's performance is sure to raise some eyebrows.

EDIT In a previous version of this article we wrongly stated OCZ had recalled it's SandForce-powered SSDs, in fact although it had similar-looking bugs its problems were amended within days via firmware updates.