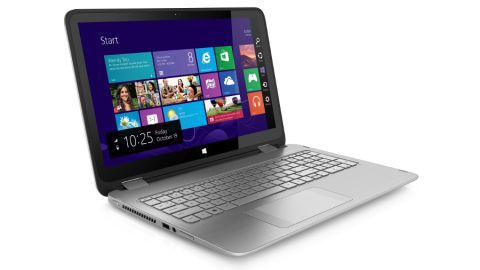 A good-looking machine, but it's disappointing as a tablet and a laptop.

The HP Envy 15 x360 (model 15-u000na) is a thin and light device that flips between laptop and tablet modes with a hinge that rotates through 360 degrees, and its 15.6-inch screen makes it one of the biggest hybrids we had seen when it first released.

That was quite a while ago now, and since then, there have been a number of larger and better convertible laptops, yet the HP Envy 15 x360 remains an excellent buy, even today.

One reason for that is that a number of price cuts have been applied over its lifetime, making it an even more affordable device. The release of Windows 10 is another reason why the HP Envy 15 x360 is still going strong. This new operating system does everything Windows 8 did, but a lot better, and it's still designed for touchscreen devices. Install that, and you have a great little device with plenty of modern features despite its age.

The Envy's 5.3 pound weight (2.4kg) and 0.94-inch thickness (about 24mm) are more akin to laptops than tablets, and that stands up when the HP is compared to its rivals: the Lenovo Flex 2 15 is another 15.6-inch hybrid, but it's thinner and lighter. The HP's nearest laptop competitor, the Dell Inspiron 15 7000, is only a little bigger.

The dimensions, and the 15.6-inch screen diagonal, mean the HP is far more comfortable when used as a laptop. With the screen flipped back to tablet mode the Envy is too large to use in one hand, which means that its use is restricted – it needs to be rested on a table or a lap to be used comfortably with two hands.

The price of £649 (around $1,015, AU$1,175) puts this machine firmly in the mid-range, but it looks like a premium device. Most of the visible surfaces are clad in smart brushed metal, with a glossy black bezel surrounding the screen. Build quality is inconsistent: pushing the underside saw the keyboard flex, and the screen was little better – only a light tap on the rear saw the desktop disfigure. A solid wrist-rest is little consolation.

The HP's trackpad is augmented with two Control Zone pads. These sit on either side of the trackpad, and they're designed to add touchscreen-style functionality. Taps and swipes on the left-hand pad select and switch between apps, and swiping the right-hand Control Zone opens the Charm menu.

In reality, it's a mixed bag. Opening the Charm menu from the right-hand pad worked flawlessly, but the left-hand pad required too much force for its gestures to function. That inconsistency renders the Control Zone somewhat pointless, especially given that the touchscreen isn't exactly difficult to reach. The trackpad doesn't make up for the disappointing Control Zone – its coating has too much resistance, so using the pad requires more effort than we like.

The keyboard is similarly disappointing. The layout is fine, but the typing action isn't: the keys feel cheap, there's not enough travel, and our presses occasionally failed to register. It's fine for brief typing, but no good for work.

The HP's specification ticks the right boxes, but there are no surprises. The Envy is built around a Core i5-4210U processor – an ultra-low-power part that's clocked to 1.7GHz and uses Intel's latest silicon designs.

The processor is paired with a modest integrated graphics core, 8GB of RAM and a 1TB hard disk – all standard stuff.

Connectivity is disappointing. The inclusion of a single-band 802.11n Wi-Fi chip means this machine can't connect to dual-band networks or faster 802.11ac routers, so don't expect great speeds. Gigabit Ethernet and Bluetooth 4.0 are standard inclusions that don't make up for the poor wireless connectivity.