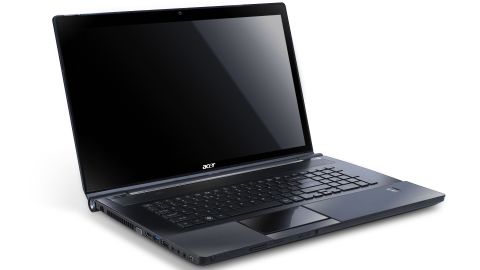 When it comes to unique laptop design, Acer is no slouch. From super-slim ultrabooks to multimedia powerhouses, the Taiwanese company that was acquired by Gateway has been cranking out laptops like crazy. That said, the company's Aspire Ethos AS8951G-9630 breaks the mold.

Not so much a portable, this model is more transportable - meaning it's more like a desktop that's easy to move. Because of its size, you won't want to bring this along on business trips or even to the local cafe. But we'll get back to that.

With its large, 18-inch 1080p display we expected this machine to be great with multimedia. But the design touch that was most intriguing is the removable touchpad that also doubles as a wireless media controller.

Using a slider on the front of the laptop, you release the touchpad. Once you pop it out, the touchpad acts as a media remote.

The problem with it though, is that the touchpad, was quirky when connected to the laptop. And, it was even more quirky when being used as a media remote.

What's worse, is that the media controls on the remote are designed to use Acer's proprietary Clear-Fi technology.

While that's all well and good, we don't necessarily use media that's stored locally. Rather, we use Hulu+, Netflix, Pandora and Zune (which does store media locally but it's designed to work with Microsoft's Zune player).

The media control buttons on the remote control don't work with these applications. So seeing these cool-looking backlit buttons is more like cool technology that we just can't use.

However, criticisms of the media remote and Clear-Fi aside, the Aspire Ethos AS8951G-9630 is a formidable desktop replacement that at around $1,499 is a great machine for anyone who's computing needs require power but aren't necessarily wedded to the idea of a cumbersome desktop rig.