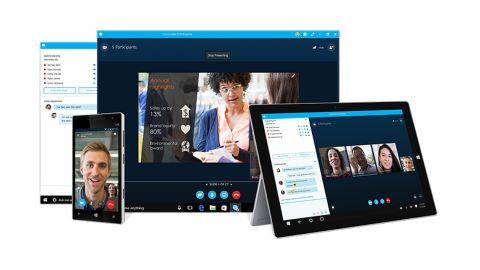 Now a part of Microsoft Teams which is a part of Office 365, Microsoft Skype for Business appears to be hanging by a thread in terms of availability. Nonetheless, it’s one of the more economical options for scheduling, recording and participating in high-volume, collaborative video conferences despite lacking some crucial VoIP functionality.

Today there are dozens of ways to communicate in the workplace. We have our Slacks and our emails and our Signals, but no matter how much they try, none of these things can replace the VoIP (Voice over Internet Protocol) services we’ve grown to rely on over the years. These make it possible to host large video meetings with wider team, make phone calls, create and manage extensions and, in some cases, even send virtual faxes.

Of course, Microsoft knows the importance of VoIP providers, which is why it has devised Skype for Business, a dirt-cheap alternative to competing services such as RingCentral Office and 8x8 Virtual Office Pro. While Skype for Business lacks dial-in audio conferencing, emergency calling and call forwarding, you can get those options with Skype for Business Server which – as its name suggests – requires deployment on your own servers.

An obvious evolutionary step for the historically consumer-focused Skype communication tool, Skype for Business is also surprisingly tricky to buy. What was once available as a standalone product that started at $2 (£1.55) a month has since been folded into Microsoft Teams, which itself is a part of Microsoft Office 365. So let’s talk about the plans and pricing for those two services before we dive into the features that make Skype for Business so unconventional.

As we mentioned previously, Skype for Business is now included in Microsoft Teams, which you can buy in three different flavors. The first is a free edition of Microsoft Teams that the company touts has no commitment, though it’s admittedly more of a ‘lite’ version of the Office 365 plans than it is a full-fledged package.

By downloading Microsoft Teams Free, you get access to the chat feature, with unlimited messaging and search. You can also try out the Guest Access feature, which allows teams to collaborate with people outside their networks. If you work with freelancers, for instance, Guest Access lets you communicate with them in Microsoft Teams. Moreover, in Microsoft Teams Free, you have the same 300-user limit as the paid plans, plus you get integration with Office programs Word, Excel, PowerPoint and OneNote.

Other features include video and audio calling, channel meetings and screen sharing. Although that seems like a lot, you are tied to just 2GB of storage per user and 10GB of shared storage altogether. Businesses will want in on one of the Office 365 plans that include Microsoft Teams (and, by extension, Skype for Business), of which there are two: Office 365 Business Essentials and Office 365 Business Premium.

The most affordable way to get your hands dirty with Microsoft Skype for Business with fewer restrictions and more flexibility is to subscribe to the Office 365 Business Essentials plan. For $5 (£3.88) per month, you’ll still have access to everything mentioned in the free version, but on top of that you’ll be able to schedule and record meetings, host Exchange emails and customize email domains and each user will get 1TB of storage space. The Microsoft Office 365 Business Essentials plan does require an annual commitment.

If those features alone don’t meet your business needs, Microsoft has the Office 365 Business Premium plan as well. $12.50 (£9.70) per month  adds web and desktop versions of Word, Excel, PowerPoint, OneNote and Outlook. What’s more, it gives you the option to purchase the Phone System add-on, thereby making it possible to make phone calls and partake in audio conferencing using Microsoft Teams.

Once you’ve subscribed to one of these packages, you can start taking advantage of some of the still-compelling Skype for Business features. Most notably, video conferences will cap out at 250 people. Then, once you’re in your meetings, Skype for Business has a whole host of collaborative bells and whistles, such as a virtual whiteboard and a Q&A function. You can even present using PowerPoints or by sharing your own screen. Administrators will appreciate the ability to mute silence certain individuals while the meetings are taking place.

Say what you will, but Skype for Business is a more affordable alternative to more fully featured VoIP options like the aforementioned RingCentral Office and 8x8 Virtual Office Pro.

With RingCentral in particular, you’re going to be forking over at least $19.99 (£15.41) per month per user, and that only supports up to 10 participants, only four of which can join audio and video conferences at a time. Compare that with Skype (For Business), and there’s a world of difference. Microsoft’s most expensive tier still costs less than the starting price of RingCentral (For Business) and, again, up to 250 people can participate in video conferences.

Despite the many benefits it has over vanilla consumer Skype, Skype for Business simply can’t compete with the big-league players in the VoIP market because, well, it’s pretty barebones. It’s 250-person Skype with a few more collaboration features tacked on. Yet it costs so little that some frugal businesses won’t mind giving up their phones if they’re saving money in the process. Whether that’s a sacrifice worth making is up to you. After all, with so many ways to communicate in the workplace, who needs desk phones anyway?