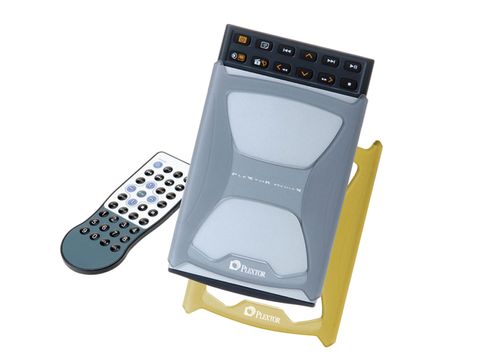 A handy device, but it's probably worth holding out for the extra functionality of the next version

Movietime! Everyone loves movies, and computers, and televisions as big as billboards. But unless you've got some media streaming gubbins like a PS3 or a decent DVD player, there's a bit of a data chasm in getting your (possibly illicitly) downloaded movies onto your telly box. And the problem with these set-ups is that they tend to be on the bankruptcy-inducing side of expensive.

Enter Plextor's Portable Media Player. It's essentially a 160GB portable hard disk drive that can be connected to your television to watch movies. And it functions quite well at a rudimentary level, supporting SCART and even component output for 720p. It will also play MPEG, DivX, XVIDs and (possibly illicitly) copied DVD folders.

It does fall a little short, though: it won't play AAC or WMV ﬁles, and bearing in mind these are the de facto standard for high-definition video it seems pointless marrying it to a player capable of 720p.

The term 'portable' is also a misnomer: when you factor in the mains adaptor and spaghetti-like slew of cables needed to connect it to a television, you're dealing with an Eee PC-sized package.

Plextor has promised an updated version of the Portable Media Player in the coming months, touting an HDMI output, and hopefully supporting more file formats. If the minor niggles are ﬁxed, then they'll be on to winner, but until then this leaves this player a little to be desired. Extra points for innovation though.