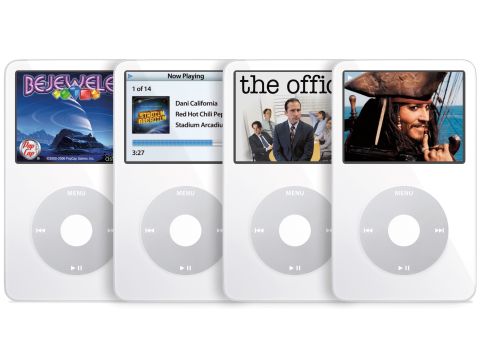 The new iPod is gorgeously thinner than the old one

The Apple iPod has become the audio player of choice for most people, but with the addition of video, it faces stiff competition.

This fifth-generation iPod took over from the iPod Photo, which introduced a colour screen to the range. The screen is now full-width and the iPod plays video, but naturally it's in Apple's unique way, with support for H.264 and MPEG4, which is another way of saying 'buy music videos from the iTunes Store'.

The new iPod is thinner than the old, so the 30GB model is a mere 11mm thick and the 60GB is 14mm thick. Or perhaps that should be 14mm thin. The other change is you can now buy the iPod in black or white, plus the Limited Edition U2 version which has a splash of red.

Apple claims the iPod has a new, improved battery life, but this is a bit of a mixed bag, as although the 14 hours of music playback is perfectly acceptable, the two hours of video playback is little short of disastrous.

Take the battery life in combination with the limitations of movie formats and relatively small screen, and you may feel better off not using the iPod for video and to some degree you'd be right.

However, the iPod is so easy to set up and use that it's worth the limitations, especially if you're planning on downloading paid-for content. Instead, use it for listening to music and looking at photos and you'll be bowled over by the controls, which consist of the superb click-wheel interface.

You're only ever a few clicks away from any photo or piece of music in your library. This is in no small part thanks to the superb iTunes software which catalogues your hard drive with the minimum of user input, and then transfers the media to your iPod calmly and without fuss.

It may lack the versatile nature of other more dedicated and expensive players, but if you're just after simply playing standard videos, this is a trouble-free solution. Leo Waldock