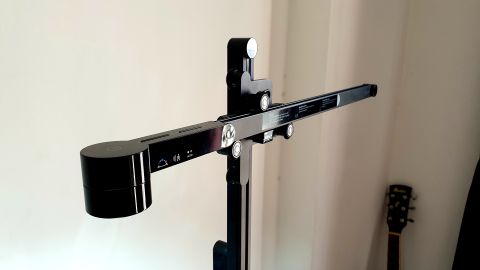 It's an expensive investment that promises to offer healthier desk lighting for as long as sixty years. Dyson's research ensures your sleeping cycle is on track with the day tracking feature and tons of customisations, but all of this does not make it your go-to table lamp, only because of its price.

Dyson is known for its technology, innovation, and especially for the form factor of its machines. But that's not all as the company is now widening its range of products that focus more on well-being.

While most of us are aware of unhealthy air and food, there are a few who know that improper indoor lighting can also be detrimental. To address this, Dyson has launched a task lamp - Dyson Lightcycle, which is engineered to support your body clock with local daylight tracking. That's because Dyson's research says that we spend up to 90% of our time indoors and stay under artificial illumination for the most part of our day. But artificial light with color and intensity at odds with the natural light can affect the body's production of melatonin, which is the hormone that sends night-time information. This imbalance not just affects your sleep, but also the way we feel and function.

Keeping the concerns mentioned above in mind, Dyson's team of engineers worked on a two-year long development program of the Dyson Lightcycle. The result is an elegant combination of technology and design with thorough research on the effect of indoor lighting on humans.

The Dyson Lightcycle is an expensive task light, it's over-engineered in comparison to many other lights that do the same job, but without Dyson's features and at way lesser price. And the question remains if you really need those features?

The Dyson Lightcycle task light is priced at Rs 39,900 in India.

It is available for purchase from Dyson's official website, demo stores at DLF Promenade, Select City Walk in Delhi and VR Mall in Bengaluru as well as through In-Home Demo service in Delhi NCR, Mumbai, Bengaluru, Chennai, Hyderabad and Pune.

A significant distinction that the Dyson Lightcycle offers in comparison to other lamps or task lights is its design. It's a three unit assembly, which you can either assemble by yourself or wait for Dyson's demo and setup session. We would recommend setting it up by yourself as it's a simple-yet-fun assembly that might remind you of making something out of a LEGO set. Although it just has three main parts - 360-degree rotating base, vertical body, and horizontal light unit.

Once set up, you will have a unique, minimalistic table light with a mechanical look. One can't miss the weight based counterweight mechanism with visible springs and bearings, giving it an industrial yet sophisticated touch. It has got looks that can add to the aesthetics of any workstation.

The very first look at the Lightcycle shows Dyson's genes as it has top-quality build and unconventional design. But everything is done for a reason, as this design also allows it to be adjusted and moved at different height and points with a light touch. It's manually adjustable at different levels. The rotating base allows 360-degree rotation; the pulley mechanism enables you to adjust the height and the horizontally placed lighting stick slides back and forth with the help of three rotary bearings at the meeting point. But to be honest, having angular adjustment would have added more value to that high price.

The ease of adjusting the light is unmatched, the movements are smooth, and the balance is excellent. The question we had was how long will it stay steady, so we checked all the critical parts and joints like bearing, spring, and the strip running the pulley. What we found out, once again, was the attention to detail that Dyson puts in each of its product. The bearings are covered in a sturdy plastic casing with edges that run on the track carved at the top and bottom of the light stick. The spring is also very safely placed in a way that no uneven pressure is applied, but the plastic strip which moves the light up and down is something that needs to be put to the test.

As mentioned earlier, the Lightcycle is essentially a three-unit assembly. Most of the light is made up of metal with subtle matte finish except for the weight cap, the LED head, and base cap. These parts are made of sturdy plastic material having a glossy texture.

The lighting arm is removable with a clip. You can place it in either direction, with the 4-pin power adapter clips into the other half built-in the central unit.  The top has a round head with six LEDs, touch control for power, intensity and tone on the top. While there are three buttons below the light for setting the light on auto mode, turning on the movement sensor and turning on Synchronise mode, we'll cover these features later in the review.

It's a common fact that excess heat is the core cause of tonal degradation and reduced life of a conventional LED. To tackle this issue, and ensure durability and long term tonal balance of the LED Dyson has used the same thermal cooling heat pipe method which is seen on a few phones lately but in a bigger form factor. The copper tube is attached to the LED head in a way that it takes heat away from the light and is transferred to the other end where a drop of water condenses and evaporates to cool down the lights.

The light stick fixes into the central unit that uses a total of six bearings, of which half help is move up and down, and the other three ensure smooth back and forth motion horizontally. You have to push the top bearing slightly upwards to fit in the light and the power attachment clips on to the mount to draw power. At the bottom half, there's a USB Type-C port let you charge your devices. But note that rotating movement of the light does get affected as the cable ties it to a certain point.

The third unit is the round base that attaches the vertical unit and hides the power cable under the base elegantly. It's heavy and very stable.

I purposely used the Dyson Lightcycle from more than a month to know how it behaves after being exposed to the dust in Noida. After 40 days, the light adjustments feel as smooth as new, but it's advised to keep it void of dust.

It might just be a lamp, but let's not forget that Dyson has put its engineering prowess to deliver the best lighting with some essential features. The Lightcycle enables you to adjust the color temperature between 2700 Kelvin and 6500 Kelvin, which covers all the natural light scenarios. The brightness can be adjusted up to 1000 lux, making it bright enough to be used as a night lamp in a big room.

These can be controlled either by the Dyson app or the capacitive touch buttons on the top of the light head. And the three buttons beneath the arm can be used to re-sync the Lightcycle as per a new location, motion sensor turn light off when you are away from it and turns on the light as soon as it detects a movement. The 'Auto' button adjusts the lighting as per the ambient lighting condition of the room.

However, the synchronization only works if you've paired your Dyson app with the light via Bluetooth and the phone is within the range. Being one of the expensive task lights in the market, so it's fair to expect a slightly advance WiFi connectivity as Dyson puts in fans. However, that's not a feature you would miss as you rarely need to turn on the light when you are away, and the motion sensor already turns it on when you move around.

The Dyson app lets you further control over the Lightcycle's settings. At very basic, you can use the sliders to change the tone and intensity of the light, synchronize light as per the outdoor conditions and change between different task modes like study, relax, precision. You can also add custom modes as per your comfort and wish. There's a Boost mode that increases the brightness for 20 minutes to help you focus on a specific task.

Additionally, the app also lets you configure your location, age, and set a baseline as a default light setting after the sunset. Once the data is set, it is sent from the Dyson app and to the 32-bit microprocessor controlling the LEDs. The Dyson's daylight algorithm analyses it to project the right brightness and tone of light from the LEDs.

The LED module is engineered to give a focused, glare-free light with high shadow quality. The reflector split has a PMMA diffusion layer at the bottom to cut out glare and throw uniform light with the help of its heptagonal shape.

Well, that's a tough one to answer. Going by the research and studies, Dyson has a point that lighting can hugely impact your biological functioning and sleep cycle in the long term. From what I've experienced, the Lightcycle does the best job at matching the natural light.

In my experience with the light, I can undoubtedly say that the Lightcycle projects very good quality light with perfect shadows and temperature, but did it help me sleep? I'm not sure. But what I did observe was that the light is less aggressive on the eyes, makes reading easy and increases focus. Its adjustable nature makes it even more effective for most tasks.

Who is it for?

The Dyson Lightcycle is task light. Unlike the mood or ambient lights, task lights focus on a particular area to help in the completion of a task. A task could be reading, sculpting, drawing, or even soldering microchips. Anything that asks for precision, focus, and can be done on a table; the Dyson Lightcycle has got it covered.

Also, if you are someone who believes in long-term investments on something that promises to make your health better, it can be a good buy. It's a task light that can be used by two generations as per Dyson.

The Dyson Lightcycle is an expensive task lamp, and that does not come as a surprise because Dyson products have always come with a premium. But Rs 39,900 for a table light could sound bizarre to many, and it's not from the most necessary items too. But the fact that the Lightcycle assures 60-years longevity (if used 8 hours a day) instead of 16M colors and other smart bulb features make it a long-term investment with a better/healthier returns.

The quality of light and customizations make it an excellent option for work and chill. The day-tracking has been impressive, although I did not notice any impact on my sleeping in a month of use, my eyes felt better while using the Lightcycle.

In the next iteration, if Dyson plans one, we would like to see a movable LED head to adjust angles and support for Alexa/Google Assistant to leverage better controls through voice.