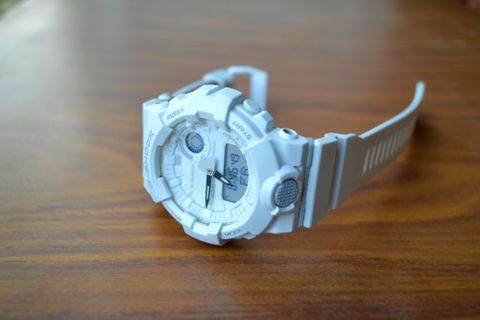 If you need a step tracker in a rugged watch, go for the GBA-800, but it's not meant to be a full-fledged fitness tracking device. If that's what you require, you should look elsewhere.

Casio has been among the top watchmakers ever since I know them, it carries a 72 year legacy of making quality watches. Of all the product series Casio has ever made, G-Shock has been a constant favorite of many, from rappers to athletes, and why not, they’re rugged and have a style of their own. That’s why many say, a G-Shock is not just a watch, it’s a G-Shock.

I have been a G-Shock fanboy ever since I had my first, but that goes a decade back and I have never got a chance to sport one ever since. After almost 7-8 years, my next G-Shock is the GBA-800. The watch that Casio launched at the CES 2018, which is also the company’s first hybrid fitness tracking watch in the series.

Although it’s primarily an analog watch, there are a couple of feature additions which qualifies it to be called as a fitness hybrid. It gets a 3-axis accelerometer, that keeps a record of total calories burned and also records step count. While we know it’s not a full-fledged fitness companion, it’s still worth asking if it’s made for the fitness enthusiast, or it’s made for G-Shock fans looking for something more than just usual.

Let’s find out in the review.

If you love the G-Shock design, there’s nothing that would disappoint you here. It’s got the chunk and the muscle combined with the usual rugged nature of the watch. Similar to its siblings in the G-Shock family, the GBA-800 is made to deal with the harshest conditions.

The GBA-800 comes in six different colors having a distinct appeal of their own. My model was white in color and it’s one of the bossiest looking white watches I have put on my wrist. It can resist bangs, drops, knocks and water submersion up to 200 meters. It’s got the raw industrial design, but that also goes well with the indestructible nature of the watch. The strap is also flexible and does give a soft and comfortable feel to the skin.

It’s got flexible wristbands that aren’t actually sweat proof, but it does come with ample of breathing space. There are around 15 buckle loops leaving tiny space in between, which helps it fit in vast wrist sizes. But if you’re hairy or have a soft skin, you might end up hurting yourself while tightening the belt at times.

Also, the white variant does look amazing in hand, but in a city like Delhi, it would not take very long to lose the bright white effect. However, you can always wash it with a soft brush and make it look new again.

There are four buttons on the body, and a large circular textured button to switch on the backlight. Rest four buttons are the usual— Adjust, Reset, Mode and Start button, with each performing a different function.

The design of a watch is hidden more on the inside than the outside. In GBA-800’s case, the watch is quite basic yet good-looking if you like simplicity. The white variant has got a white inner skin, where the bottom half of the face is covered with a monochrome display, while a small circular display is located at the one o’clock position. The bigger display shows time, world time, stopwatch and information related to fitness, while the circular display shows your step goal progress. Since it’s a hybrid analog watch, there are two hands telling— hour and minutes.

Overall, the GBA-800 has the looks and quality of the G-Shock we know. It’s a bit smaller than average G-Shock size, made to be worn a slightly loose, but it still retains the feel you primarily pay for while buying a G-Shock.

As mentioned previously, it uses a basic 3-axis accelerometer for fitness tracking. By fitness tracking we mean the basics— step counter, calorie burn and for measuring exercise intensity. For those expecting heart rate monitor, or sleep tracking, GBA-800 isn’t the perfect choice. You should rather buy a dedicated fitness watch or tracker for such functionalities.

As the GBA-800 comes with Bluetooth connectivity options, you can pair the watch with your Android or iOS running device. To sync metrics and tweak watch settings, you need to install the G-Shock Connected app.

Pairing the watch to the phone takes no effort, it’s quick and easy. The app does not come with a feature loaded interface, instead, you see a minimalistic and subtle looking screen after setting up. The first screen shows today’s activity and the percentage of goal completion depending on whatever you have set for a day. You’ll find steps taken and calorie burnt on the main screen, and get a more detailed graphical representation of the metrics upon tapping the numbers.

Upon opening all activity option, you’ll find a complete calendar with your daily activity record. You can find daily, weekly and monthly data inside the app, you just have to keep the phone synced with the app. Furthermore, you will find times, stopwatch, world time and a guide upon swiping from left to right or vice versa.

While using the app, it became quite evident that it’s not for serious fitness addicts. Instead, it’s more of a conventional watch that you wear and forget. Meaning, you don’t need to charge it or worry about its position. You just put it on and start your day.

The GBA-800 gives accurate results when it comes to steps tracking. I compared it with my Fitbit Charge 2, and the results were more or less the same. Although it wasn’t consistently matching the Fitbit, the difference was never more than 4-5 steps.

The biggest advantage of having a G-Shock as a fitness companion is its battery. While most fitness trackers need to be charged at least once a week, the CR2016 battery inside is claimed to last for more than 2 years.

Before you ask that question to yourself, have a clear understanding of what you are looking out for— a G-Shock, a smartwatch or a fitness watch. If you are a fan of rugged yet stylish-looking G-Shock watch with an added feature to track your daily activity, consider this. It’s not focused at fitness enthusiasts who like having a range of fitness-oriented features during work out sessions.

It’s rugged, looks stylish, has all the watch features and can organize your daily data via a minimalistic app. In my opinion, for an office goer who does not work out and still likes to keep a check on basic daily activity, the GBA-800 does a pretty fair job. And the best part about G-Shock is that it can outlast any other smartwatch/fitness band when it comes to durability. So, that’s one of the biggest points of consideration before buying.