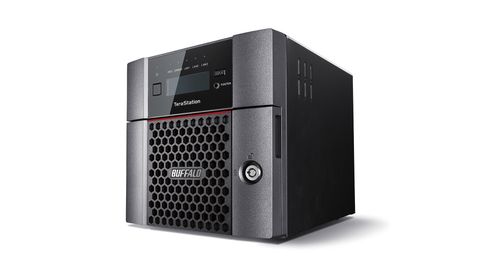 With all its creative eggs in the file serving basket, the fact that this NAS performed well at this particular task wasn’t a huge surprise.

If you want 500MB/s plus performance from the 5210DF, then you’ll need to connect a single client using a 10GbE connection. Channel bonding the Gigabit ports together with an appropriate switch will get you 200MB/s, and a single Gigabit LAN port half that amount.

All those numbers are bandwidth capped values, and not defined by the 5210DF computing platform. There’s enough computing power to drive the LAN ports, with plenty of CPU performance to spare.

The two SSDs that came installed have the potential to work at over 1000MB/s if configured in RAID 0 (stripe) mode, though two bonded 10GbE connections would be required to move that amount of bandwidth outside the box.

We’d recommend the 1TB drives. Not only for the extra capacity, but also because they are 400TB TBW (Total Bytes Written). Micron’s 256GB capacity drives are only 120TB TBW rated, making them proportionally less resilient.

For the review model, using the 1TB drives, the TBW rating translates into 91GB being written every day for approximately 12 years.

The inclusion of 10GbE and dual Gigabit links make the 5210DF capable of supporting lots of busy concurrent users, or a smaller number of truly demanding ones.

With dual SSDs installed, speeds in excess of 500MB/s reading and writing are possible to a single client, a performance level normally associated with locally mounted SATA SSDs, and not network attached storage.

It could, in theory, go even faster if there was an affordable mechanism to bond all three LAN ports together, and the client machines all had quick local storage.

But we suspect that Buffalo intended that a single workstation would connect directly over the 10GbE port, including the dual Gigabit ports for wider network distribution.

The firm’s promotional material mentions server backups and video editing as potential uses, and this NAS can do either of those jobs admirably.

However, 2TB won’t go far editing 4K sourced video, and a Thunderbolt connected external SSD drive hooked up to a PC will be quicker than a 10GbE networked NAS box when it comes to backups.

It’s also sobering to consider that the Samsung (MZ-V6P2T0BW) 2TB Pro NVMe drive costs about 60% of the price of this product, and a workstation with that installed can expect sequential read speeds in excess of 2,000 MB/s and 1,500MB/s writes.

Buffalo has four, eight and even 12 bay derivatives of this design, which all smash the low 2TB ceiling should you have the pockets deep enough to consider them.

What concerns us about this particular design is that Buffalo’s single-minded pursuit of raw file serving performance has meant the company has chosen to ignore other important parts of the greater NAS experience.

For around half the cost, Synology has the drive-less DS1817, a machine with dual 10GbE ports, eight drive bays and an OS with 100+ installable applications. Even when you factor in buying enterprise-class SSDs, it isn’t any more expensive, and it’s certainly a substantially more flexible solution.

If this device is only used to secure the contents of another server, then it can do that effectively. But hardware purchased for IT is rarely sourced for such a singular purpose, as business demands quickly evolve.