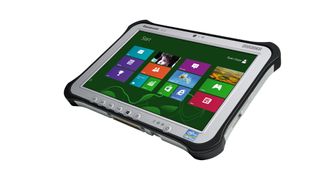 Panasonic wants to become more than a tablet maker.

We wanted to find out more and Stephen Yeo, Panasonic's Marketing Director in Europe, shed more light on one of the most ambitious plans from the Japanese technology giant.

Panasonic has teamed up with Vodafone initially with more mobile network operators lined up to cover specific geographical locations (e.g. Telefonica for Spanish-speaking countries, Orange for French-speaking ones etc)

It will roll something similar to Amazon's Whispernet, at least in theory. While Whispernet is free as the cost is absorbed by Amazon, Panasonic's MVNO service will depend on the product with which it is bundled.

That means two things. Firstly, the SIM is embedded, so you won't be able to swap it for something else. That's done because the bundled one is certified already and for a bunch of other reasons.

Secondly, some products like a motion detector camera will come with a PAYG service (e.g. you can get access to 250 shots a month) and will vary depending on usage/frequency.

One Stop Shop for services

Yeo confirmed the service will launch in the US in three months and is ideal for global customers looking for an easy-to-roll out solution that doesn't depend on the whims of Wi-Fi.

Panasonic wants to become more like IBM, Yeo added, but not just in IT but in anything that does compute and communication.

When asked whether Panasonic would want to become a major cloud-provider like IBM, which acquired Softlayer to boosts its cloud computing capabilities, Yeo said no.

"This is not our core competencies and like Netflix, we do use a lot of big players", he said before hinting that Panasonic will acquire more SI (system integrators) and logistics players in Europe over the next 18 months.