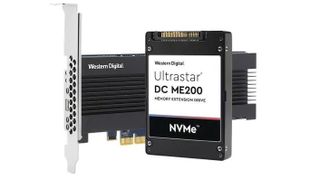 Western Digital has unveiled a new product, the Ultrastar ME200, which is being presented as a Memory Extension drive. For once, it is the software, rather than the hardware, that holds the key to the product’s unique selling point.

The ME drive is essentially a repackaged Ultrastar SN200 that uses 15nm MLC NAND with an endurance of 17 drive writes per day (DWPD). Available in 1TB, 2TB and 4TB capacities, it comes as a plug-in card or a 2.5-inch form factor like a traditional SSD.

At its core is a software stack that implements a memory management unit (MMU) which maps the drive into the server memory pool including more than 20 algorithms to “intelligently manage data flow” between DRAM and NVMe SSD to maintain, in Western Digital’s own words, “near-DRAM performance”.

Supplementing DRAM, not supplanting it

Benchmarks carried out by the company showed that a server would lose only 15% memcached performance by swapping a server with 768GB RAM for one with 96GB RAM and an Ultrastar storage solution; an 8:1 memory to ME drive ratio is recommended although application architects may prefer to experiment first.

The Ultrastar Memory Drive will be recognised as system memory at system BIOS and OS levels and will be transparently available on demand. Not surprisingly, you won’t be able to use it as part traditional SSD, part memory and the drive does not support persistent data retention or hot pluggable functionality.

It will be interesting to see whether others (Seagate notably) jump on the software+hardware bandwagon instead of adopting cutting edge technology like Intel Xpoint to close the gap between traditional storage tiers.