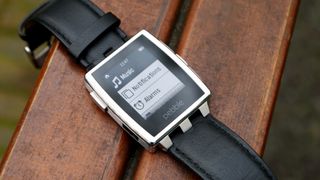 There's a lot to like about Pebble, not least its long battery life and low price, but users would be forgiven for being a bit jealous of the flashy new Android Wear.

There's now less to be jealous about though, as version 2.3 of the Pebble app has just landed on Google Play and it brings with it Android Wear compatibility, allowing any Android Wear app to work with it, so you can view and reply to notifications on your Pebble or Pebble Steel, just like you would on an Android Wear device.

The lack of a touchscreen means you have to use physical buttons of course and you're also more reliant on pre-defined responses, which you can set up to five of, but it brings Pebble a little closer to the functionality of Android Wear.

Other than that you can also now set it so that apps and watch faces will update while your Pebble is idle and the update includes various bug fixes and stability improvements, which is always nice. No-one likes an unstable Pebble.

As great as these new features sound they could just be the start, as Pebble recently announced that it's planning radical new software for later in the year.