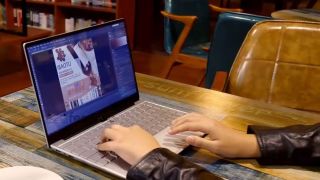 We cringed at the world’s cheapest laptop, Thomson X5 Neo 10, with its 2GB of system memory and 32GB onboard storage. That's hardly enough to run Windows 10, let alone Windows 7.

But not all cheap laptops are the same. The Lhmzniy A9, although a mouthful of a name, costs just $375 at Gearbest using the code W40C422F929EB001 at checkout.

At last - a vendor that saw sense in combining a decent CPU with plenty of storage and a fast solid state drive. The A9 has as much memory and storage capacity as a flagship laptop and even if the processor is on the weaker side, it should be powerful enough for most tasks.

It comes with 16GB of RAM and a massive 1TB solid state drive (M.2 SATA), equalling the top spec on the Microsoft Surface Laptop 3.

However there is no Core i7 processor here, as the A9 contains an Intel Celeron 3867U CPU, albeit one of the faster ones launched in 2019, which can be 80% faster than an Intel Core i3 (from 2010 and on the Passmark test).

Other than that though, there aren't many corners cut. We were surprised to find that it has an all-metal magnesium aluminium chassis with a 14.1-inch full HD display (TN, not IPS sadly) and super narrow bezels. Connectivity wise, the only disappointment is the lack of Type-C connectors.

There's also two USB 3.0 ports, one mini HDMI, one audio connector, one card reader and one proprietary power port. The spec sheet contains three additional features that are usually found on more expensive laptops; a backlit keyboard, two batteries and a privacy cover for the webcam.