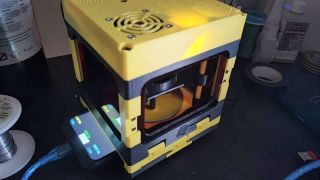 A new 3D printer has been unleashed on the world as an open source project, with the idea being that you can print the vast majority of the parts for the compact device – which is powered by a phone – using an existing desktop 3D printer.

This is the brainchild of Italian firm Lumi Industries, which provides the plans for the LumiBee 3D printer so anyone can download them, and then print 95% of the parts required for the device using a desktop filament (FFF/FDM) 3D printer.

Of course you subsequently need to build the mini 3D printer yourself, but the company promises it’s “easily assembled” although you need to purchase a few parts separately (the missing 5% which consists of motors, a printed circuit board, 4mm linear rods and bearings).

Once it’s finished, a clever twist in the design is that the LumiBee uses a photosensitive liquid resin to print objects, and that resin is shaped using light from the screen of a mobile phone.

As the company notes, if you have an older mobile kicking around, using it to power your 3D printer could give a second lease of life to the device which you may not otherwise have any need for. Lumi Industries says that “most cell phones” should be able to be used as a light source to polymerize the resin.

The printer works in conjunction with a smartphone app, which you’ll run on your main smartphone of course (as opposed to the older handset ensconced in the actual printer).

However, note that the LumiBee is still very much in its early stages, as the maker observes: “Lumibee is a challenge we launch to all of you! It is [an] early stage idea we hope will stimulate your curiosity and enthusiasm, not only to simply replicate it, but to improve it and make it grow!”

Apparently the Daylight resins tested with the LumiBee are produced by Photocentric, and Ben Hutton, Senior Sales & Marketing Manager at Photocentric, noted that: “We are delighted to support LumiBee’s DIY project with our patented daylight 3D curing technology and resin.”

This DIY – or perhaps we should call it PIY – 3D printer is certainly a novel idea, and with any luck the open source project will see further honing and development as time goes on. And even if it doesn’t, it could perhaps spark off similar creative ideas along these lines.