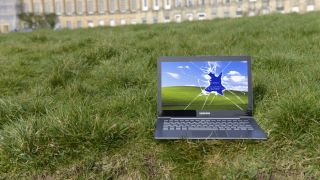 Uh, can we get it repaired?

Updated: Graham Cluley has provided with more background details regarding how the data in his blog has been analysed. His spokesperson told TechRadar Pro that "there was an increase in computers cleaned from malware (CCM) in the 4th quarter of 2013. This increase was predominately due to a new detection added to Microsoft's security products for a threat known as Rotbrow. Rotbrow is a threat that uses deceptive tactics instead of software vulnerabilities to trick its victims into installing malware. Rotbrow was more prevalent on Windows 7 and Windows Vista, likely for monetization purposes (e.g. Click Fraud, etc). It is important to note that the rise in computers cleaned is not an indication of the operating systems security effectiveness. Deceptive tactics can trick anyone. Detections of Rotbrow significantly decreased after December 2013 once systems were cleaned and we expect the CCM infection rate to return to more typical levels in subsequent quarters as the Malicious Software Removal Tool and other security products work to clean the remaining backlog of old Rotbrow infections."

Windows XP is past its sell-by date, but Microsoft has warned that its comparatively newer operating systems Windows Vista and Windows 7 are more at risk of malware infections.

That's according to the software giant's latest Security Intelligence Report, which shows an increased rate of infection for Vista, at 3.24 percent. Windows 7 is lower at 2.59 per cent, compared to 2.42 per cent for XP.

Unsurprisingly, Windows 8 and 8.1 have the lowest infection rates of 1.73 per cent and 0.08 per cent respectively, arguably because they aren't as popular as their predecessors and therefore present a less lucrative market for the shady hacker underworld.

The figures have been normalised to reflect different numbers of computers running each operating system.

He pointed out that the numbers Microsoft has come up with cover a time when Windows XP was still receiving updates, and was thus more secure.

He also suggested that the popularity of newer versions is partly to blame for the increased threats, as those versions would naturally be used more often to access the internet.

Microsoft ended security support for Windows XP in April. This week's Patch Tuesday will be the first time where vulnerabilities and bugs are pointed out in the ageing OS, but not fixed, making XP a sitting duck for cyber criminals.