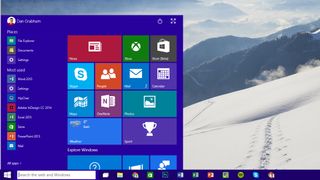 The Start menu has changed in this build... and not for the better

The Windows 10 Technical Preview has been out since the beginning of October and while it has had three milestone updates (plus many more smaller ones) since then, it's not until now that we've had a really big update in terms of the feature set.

1. Not everything demonstrated last Wednesday is here

The latest build is 9926. It was released to members of the Windows Insider Program over the weekend, so here's what's new, what's wrong and what's right with Microsoft's latest preview release of Windows 10.

Once again, we need to stress that this is really very pre-release software – we won't see a full Windows 10 release until much later in the year, so this OS still has several months more work to be done on it. If you saw last Wednesday's Windows 10 keynote speech from Microsoft HQ in Redmond, you might be a little disappointed as not all the Windows 10 features demonstrated there are present.

However, it's clear that there will be more preview builds released to the Insider Program, and they'll be released faster, too: "Much is still in-progress and we're getting it out to you as fast as we can – so you can try it out and give us feedback," says Microsoft's Gabe Aul. "Over the course of the next few builds, you will see us refine Windows 10 and continue to improve the experiences as well as quality and stability."

Some of the functions that used to be in the Charms bar on Windows 8 are now in the Action Center menu (launched from the system tray/Notifications area) in the bottom right. A new Connect feature enables you to find and connect your PC to devices such as a DLNA-enabled TV or Bluetooth speakers far more easily.

However, more work is needed; this didn't work for us when we tried it, and we couldn't connect to either our smart TV or locate a pair of Bluetooth headphones. Note that you can also connect to other displays using a button in the Action Center.

3. There are plenty of issues

The last major build of the Technical Preview, November's 9879 release, was pretty buggy, and with the advent of a batch of new features here the story is the same, although it doesn't appear to be affecting the stability of our version of the OS.

There are actually stacks of issues, which Microsoft has fessed up to. A boot selection menu shows whenever the PC is started for many. Xbox Live enabled games that need sign-in won't work (this is being fixed via Windows Update very shortly). Tiles on the Start menu show shortened names, while sometimes the Start menu doesn't load properly (we haven't experienced this ourselves but Search is really slow).

The release also isn't optimised for Connected Standby, so if you're used to this you may find your battery life is significantly shorter. One again, all these issues show that you shouldn't install the Windows 10 Technical Preview on a PC you need to use on a daily basis (unless you're TechRadar that is, because we need to test it out to write articles like this).

4. Changes have been made based on feedback

Microsoft is keen to stress that feedback from Windows Insiders has been taken into consideration. Alt-Tab was too jarring before, many folks said. It was changed. It was hard to make apps full-screen in some circumstances. Changed. People wanted to be able to pick a default folder for File Explorer. Changed. Feedback works.