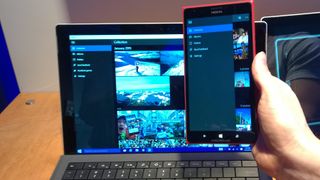 "In Windows 10, we have this notion of a universal app platform," Microsoft engineer Don Box said in a session at WinHEC 2015. "And the apps that target it are called Windows apps. Sometimes we say universal apps, but we call them Windows apps."

Box goes on to detail that Windows app can run "on every device family: phone, PCs, Xbox, IoT, and other devices like HoloLens."

Aside from branding, Microsoft's strategy with desktop apps and Windows apps has not changed.

"Microsoft expects developers to create new Windows apps, not new Windows desktop applications," Paul Thurrott wrote on his site. "And it has improved the Windows universal app platform - which is really just a refinement of Metro...to make it more powerful and capable."