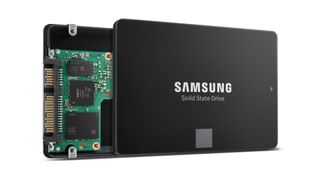 The company already has one such 250GB SATA SSD going into mass production, with its 6th-gen 3D V-NAND stepping up to 100+ layers in an industry first.

Samsung explains that it’s using new ‘channel hole etching’ technology to add 40 percent more cells to its previous 9x-layer structure. Furthermore, the new drives boast a circuit design optimized for speed, with the manufacturer quoting under 450 microseconds for writes and 45 microseconds for reads.

All this boils down to a claimed 10 percent increase in performance compared to the previous-generation tech, with power consumption being reduced even further by 15 percent.

While a 250GB model is already in production, Samsung also says a 512GB SSD will emerge later this year.

These models will be targeted at enterprise clients and heavyweight server usage, but the new 3D V-NAND will also be gracing next-gen mobile devices and the automotive market, Samsung notes.

As ever with freshly unleashed enterprise offerings, we can expect the technology to trickle down to consumer products – it’s just a question of how long that will take.

At any rate, it’s good to see innovation coming to SSDs at quite a pace: Samsung also boasts that it developed this new generation tech in 13 months, reducing the time to mass production by four months.