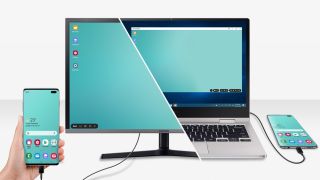 If you're considering upgrading from a Galaxy S10 to a Galaxy Note 10 in order to utilize the latest version of Samsung's DeX, you may want to hold off as a new software update is bringing many of the best features from the Note 10 to the S10.

A software update for the Galaxy s10, s10 plus and s10E is currently rolling out to certain regions and includes support DeX PC connectivity, Live Focus blur effects while recording video and the latest Android security patch.

In a press release, Samsung explained how Galaxy S10 users can begin taking advantage of the latest version of DeX, saying:

“The update also incorporates support for Samsung DeX for PC. Once users download the app from SamsungDeX.com, they’ll be able to launch Samsung DeX on their PC or Mac simply by connecting their Galaxy S10 to their computer via USB cable. Link to Windows support has also been added, which means that Galaxy S10 users will be able to wirelessly connect their phone to their Windows 10 PC and easily view its contents, send and receive messages, and sync recent photos directly from their computer.”

While DeX was first released as an accessory sold with the Galaxy S8 and S8+, Samsung decided to revamp DeX for the release of the Note 10 and allow users to access apps on their smartphones from their computer without the need for a separate monitor.

DeX may not be for everyone but by adding the option to use it on the Galaxy S10, the Korean hardware giant is giving more users the chance to try it out for themselves.

The over-the-air update for the Galaxy S10 has reportedly begun to roll out to users in Germany and Switzerland and this could mean that it is only ready for variants of the S10 which use the company's own Exynos processor. The US version of the S10 and other regional variants, use Qualcomm Snapdragon processors so the latest features update will likely arrive at a later date.