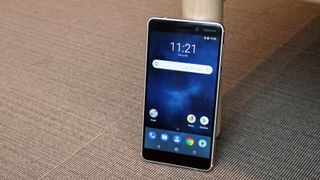 Update: After being launched on April 4, the phone will officially go on sale on April 6.

The Nokia 6 (2018) is the successor to last year’s Nokia 6. It packs more power than its predecessor but it’s also more costly. Factors that work in its favour are its aluminium body and fast charging but it leaves the user wanting when it comes to the display and camera quality.

It doesn’t change too many features, but addresses most of the complaints that users had with the Nokia 6. Though not perfect, the Nokia 6 (2018) is a decent mid-range phone. It was officially announced at the Mobile World Congress (MWC)  earlier this year.

The phone is carved out of a block of aluminium giving the phone a solid but smooth outer body.

HMD Global added its own unique take on the the design on Nokia phones by adding the ‘double anodisation’ process. The method basically lets you have a metal phone that may be blue from behind or have golden trims when the metal underneath isn’t colored at all. With the Nokia 6 (2018), the device will be available in black with a scattered copper and in white with a iron trim.

The fingerprint was placed on the front of the Nokia 6, but this year’s edition has it moved to the back. Users will also have the option of unlocking the phone with their face.

Nokia’s gotten rid of all the capacitive buttons giving the new phone a cleaner look than its predecessor.

Though the Nokia 6 (2018) and the Nokia 8 Sirocco have same sized displays, the new Nokia 6 is a larger smartphone due to bigger bezels around the edges. It has a 5.5-inch 1080p IPS LCD screen.

Unfortunately, the phone doesn’t have an 18:9 aspect ratio display giving the user more space to tap their thumbs while playing games. They aren’t the norm in mid-range phones, but in a phone like this, you can’t help but feel that it’s lacking.

The chipset on the Nokia 6 wasn’t too impressive. It only had an entry-level Snapdragon 430 SoC. The new Nokia 6, on the other hand, comes with a Snapdragon 630 chipset. Most smartphones that run on that particular SoC have proven to function well and support heavier games such as Asphalt 8.

There are going to be two variants of the phone, the 3GB/32GB option and another 4GB/64GB configuration.

The Nokia 6 (2018) is part of the Android One program, which means it has a stock Android interface making the phone clutter free, like other Nokia phones.

The Nokia 6 (2018) has 16MP rear camera equipped with a Zeiss-branded lens. The photo samples available so far don’t paint an impressive picture. The images come out soft since the camera doesn’t feature image stabilisation (IS).

The 8MP front camera comes with the Nokia Bothie feature, letting users capture two moments in one go. Users active on social platforms would welcome such a feature.

Both the Nokia 6 and the Nokia 6 (2018) are powered by a 3000mAh battery. The newer model should, comparatively, have longer battery life since it runs on a more efficient chipset. Thus, we can expect the battery to last longer than a day, even under heavy use.

Another crucial upgrade is the integration of fast charging in the Nokia 6 (2018). The original Nokia 6 supported fast charging as well, but didn’t come with a fast charger in the box itself. The new Nokia claims to be able to charge from 0% to 50% within a span of 30 minutes.

At the MWC 2018 Nokia Mobiles announced that the Nokia 6 (2018) would be priced at a global average of around Rs 22,196. In India, the price will probably be a little cheaper keeping with past Nokia smartphone launches. The market in India for mid-range phones is more competitive and currently dominated by Chinese players.

It’s a little more expensive than the Nokia 6, but it’s also equipped with better hardware, like a more powerful SoC and fast charging.

The phone won't be available on Amazon or Flipkart but users can always go to the Nokia Mobile Shop and buy the phone offline from one the retail outlets.