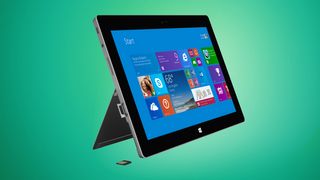 Rumours of a Surface Mini have hotted up in recent weeks, but Microsoft also has an Intel-based Surface tablet in the works, according to multiple reports.

Rumours of the Intel model first appeared on Bloomberg, and later a chip industry source confirmed to CNET that there will "definitely" be a new Surface model powered by an Intel processor.

The source suggested that a Haswell variant with beefier battery life and Windows 8.1 will be outed, rather than one with an Atom Bay Trail processor.

This matches Microsoft's approach to the higher-end Surface Pro models, which have used Intel Core i5 chips, such as the Haswell Core i5-4300U in the Surface Pro 2.

Any new Surface tablet is likely to be joined by the Surface Mini, which is expected to house a Qualcomm chip and run Windows RT 8.1.

The Intel-based tablet will apparently be a regular-sized Surface tablet (around 10.6 inches), but if the Surface Mini takes off, we could see lots of newer models in the months to come.

Microsoft is expected to unveil the new Surface range at an event on May 20.