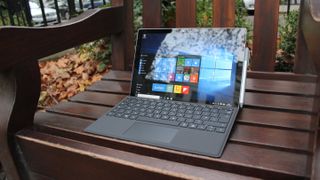 We all know that generally speaking tablets are on the wane, but according to the latest figures, 2015 was the first time ever that numbers of slate shipments witnessed a decline in double digits.

According to stats crunched by TrendForce, 168.5 million units were shipped last year, which is a 12.2% drop compared to 2014's tablet shipments.

Thus TrendForce concludes that a gradual contraction is becoming a more pronounced trend, although some companies are bucking that trend – and Microsoft is one of them.

Redmond isn't a top tablet vendor yet, of course, so let's look at the major players first. Naturally enough, top of the tree is Apple, but the iPad only managed to shift 49.6 million units in 2015 compared to 63.4 million the previous year – a decline of 22% year on year.

Samsung was in second place, but fell almost as heavily with an 18% year on year decline to 33.5 million units in 2015. The company now has a tablet market share of 19.9%.

The other slate players are a long way behind these two giants, with Lenovo in third place with a market share of 5.8%, followed by Amazon on 3.3% and then Asus on 3.2%. Amazon actually overtook Asus in 2015, doing particularly well in Q4 with the new 7-inch Fire tablet.

As for Microsoft, TrendForce noted that the company definitely deserves highlighting despite not being in the top five tablet vendors. Redmond apparently delivered "stellar shipment results" last year driven by strong sales of the Surface Pro 4 and older Surface offerings.

In total, Microsoft's tablet shipments increased nearly 50% last year, which is a remarkable swing against the general trend. Redmond is also helping to push the popularity of 2-in-1 convertibles (a separate category from tablets) forward, a market which is expected to gather great pace in the near future.