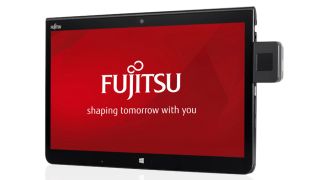 Fujitsu has launched a new 2-in-1 machine aimed at businesses with an emphasis on security – indeed, the company claims this is the most secure hybrid it has ever produced.

The Stylistic Q736 consists of a 13.3-inch full HD tablet with a detachable keyboard, and it carries Fujitsu's new PalmSecure scanner (the small box on the right of the tablet in the image above).

This allows the user to simply hold their palm over it to unlock the machine, and the process is more secure, faster and generally easier than other traditional biometric authentication such as fingerprint recognition (it's also more hygienic, Fujitsu notes, as you don't actually have to touch anything – the scanner reads the veins in your palm from a distance).

With all these security measures on board, Fujitsu says this tablet is perfectly suited to industries where security is at a premium such as financial services or the NHS.

The Stylistic Q736 comes with Windows 10 Pro and a stylus, and is powered by a Skylake Core i7 vPro processor with 4G LTE supported. It weighs under a kilo, and also boasts options such as a keyboard docking station and a second battery.

Battery life is a claimed 9.5 hours, although with the second battery option you can get up to 15 hours of longevity on the go.

Jorg Hartmann, Head of Category Management, EMEIA Product Business, Fujitsu, commented: "Since human error is one of the most common security problems, we have taken a human centric approach towards systematically eliminating any weak points. The new Stylistic Q736 incorporates the very latest biometric and SmartCard security technologies that help reduce the chance of simple, but potentially disastrous mistakes, such as someone leaving their tablet unlocked in a public place."

The device will be available next month, with the price still to be confirmed.