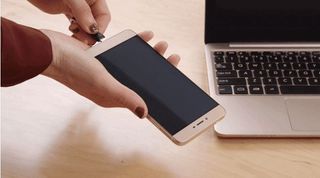 Remember HP's Elite X3 Windows smartphone? It came with a Wi-Fi controlled mobile extender that looked like a laptop, one that was powered by Microsoft's Continuum.

Well, there's a Kickstarter project called Superbook that promises to deliver the same thing for most electronic devices out there.

Support for Android, Mac OS and Windows has been confirmed with iOS being ruled out and Windows Mobile and Chrome OS still unknown.

The device has an 11.6-inch display, a 10-hour battery life (you can also charge your phone), multi-touch trackpad and android navigation keys with support for multi-windows and resizing support via Andromium's SDK and three ports.

You will still be able to take calls and use your camera (and other features) while working on the Superbook.

Scheduled to launch in January 2017, the Superbook is expected to cost $99 (about £76, AU$128), which pays for the docking station and a charger and a custom OTG USB cable.

It uses DisplayPort technology rather than MHL and requires that you download a free application on your smartphone to do the trick.

Seven stretch goals have already been reached with the last one offering backlit keys and full HD option as an added option.